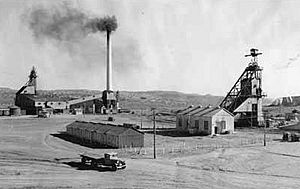 Gallup ( Navajo: Naʼnízhoozhí) /nɑ̀ʔnɪ́ʒòːʒɪ́/; Zuni: Kalabwaki) is a city in McKinley County, New Mexico, United States, with a population of 21,605 as of the 2020 census. A substantial percentage of its population is Native American, with residents from the Navajo, Hopi, and Zuni tribes. Gallup is the county seat of McKinley County and the most populous city between Flagstaff and Albuquerque, along the historic U.S. Route 66.

The city was founded in 1881 as a railhead for the Atlantic and Pacific Railroad, and named after David Gallup, a paymaster for the railroad. It is on the Trails of the Ancients Byway, one of the designated New Mexico Scenic Byways. Because of the nearby rugged terrain, it was a popular location in the 1940s and 1950s for Hollywood Westerns.

Gallup was founded in 1881 as a railhead for the Atlantic and Pacific Railroad. The city was named after David Gallup, a paymaster for the Atlantic and Pacific Railroad. During World War II, the city fought successfully to prevent 800 Japanese American residents of Japanese descent from being placed in wartime internment, the only New Mexico city to do so.

Gallup is known as the "Heart of Indian Country" because it is in the middle of the Navajo reservation and home to many tribes.

U.S. Route 66 passes through Gallup, and the town's name is mentioned in the lyrics of the song of the same name ("You'll see Amarillo and Gallup, NM"). In 2003, the U.S. and New Mexico Departments of Transportation renumbered US Highway 666, the city's other major highway, as Route 491. Former Governor Bill Richardson pushed for (and got) the number changed because "666" is associated with Satan and Devil worship, and thus it was considered "cursed" or a "Beast" to some locals. The situation was exacerbated by the high death toll on the highway, which was largely a result of high rates of drivers under the influence of alcohol or drugs, and budget shortfalls among both the New Mexico Department of Transportation and state and local law enforcement agencies.

Being the largest city between Flagstaff AZ and Albuquerque, Gallup claims many notable buildings, places, events and people. The historic El Rancho Hotel & Motel has hosted a numerous array of movie stars including John Wayne, Ronald Reagan, Humphrey Bogart, Spencer Tracy, Katharine Hepburn, Joan Crawford, Kirk Douglas, Doris Day, Gregory Peck, and Burt Lancaster. The rugged terrain surrounding Gallup was popular with Hollywood filmmakers during the 1940s and 50s for the on-location shooting of Westerns. Actors and film crews would stay at that hotel during filming. Films made in Gallup include Billy the Kid (1930), Pursued (1947), The Sea of Grass (1947), Four Faces West (1948), Only the Valiant (1951), Ace in the Hole (1951), Escape from Fort Bravo (1953), A Distant Trumpet (1964), and The Hallelujah Trail (1965).

Gallup is sometimes called the "Indian Capital of the World", for its location in the heart of Native American lands, and the presence of Navajo, Zuni, Hopi, and other tribes. 1/3 of the city's population has Native American roots. Gallup's nickname references the huge impact of the Native American cultures found in and around the city.

There were 6,810 households, out of which 41.1% had children under the age of 18 living with them, 45.3% were married couples living together, 19.8% had a female householder with no husband present, and 28.5% were non-nuclear families. 23.8% of all households were made up of individuals, and 6.8% had someone living alone who was 65 years of age or older. The average household size was 2.85 and the average family size was 3.39.

It has close proximity to Native American reservations, and historic lack of economic development in addition to many mine closures in the last century. As a result of these mine closures, a large proportion of Gallup's households are low-income. The median income for a household in the city was $34,868, and the median income for a family was $39,197. Males had a median income of $33,380 versus $24,441 for females. The per capita income for the city was $15,789. About 16.6% of families and 20.8% of the population were below the poverty line, including 26.8% of those under age 18 and 16.8% of those age 65 or over.

Gallup, like most of the interior Mountain West, has a cool semi-arid climate (Köppen BSk). The summers are hot during the day, but the high altitude and low humidity means that nights remain distinctly cool: as late as July 2 of 1997 the temperature fell to 31 °F (−1 °C). Despite the large diurnal temperature range, most rain falls in the summer from afternoon thunderstorms. Despite the dry atmosphere, hot sun and an average of only 7.4 days with maxima below 32 °F (0 °C), winter nights are so cold snow is common and sometimes heavy: the maximum in a month is 29.10 inches (0.74 m) in December 1992 and the most in a year 65.10 inches (1.65 m) between July 1990 and June 1991. Actual snow cover, with the hot sun at Gallup’s altitude, however, has never exceeded 13.1 inches (0.33 m), and for no day averages over 3.5 inches (0.089 m). 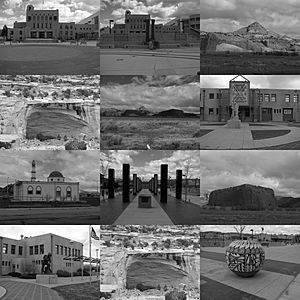 Previously the Bureau of Indian Affairs (BIA) operated Manuelito Hall in Gallup, a dormitory which housed Native American students attending Gallup-McKinley schools. In 1973 it had about 300 students. That year the BIA closed Manuelito Hall, planning to move students to various boarding schools.

All content from Kiddle encyclopedia articles (including the article images and facts) can be freely used under Attribution-ShareAlike license, unless stated otherwise. Cite this article:
Gallup, New Mexico Facts for Kids. Kiddle Encyclopedia.