El Rancho Hotel, Gallup, New Mexico, is a historic hotel built by R.E. “Griff” Griffith, the brother of film director D.W. Griffith. The pair encouraged early film production in the surrounding area. It is located on old U.S. Route 66 and became the temporary home for many Hollywood movie stars.The rambling, three-story hotel building has a large portico with a central balcony reminiscent of the Southern Plantation style. The National Park Service describes it as having a “rusticated fantasy appearance.” Materials include brick, random ashlar stone, and roughewn wood with a wood shake roof and brick and stone chimneys. The lobby features a spectacular walk-in fireplace made of brick and random ashlar stone surrounded by twin stairways made of split logs that leadi to the second floor guest rooms. The slogan “Charm of Yesterday, Convenience of Tomorrow” is rendered in neon above the main entrance.

It is on the Trails of the Ancients Byway, one of the designated New Mexico Scenic Byways.

It opened in 1937 as a base for movie productions. Employees were trained by the Fred Harvey Company. 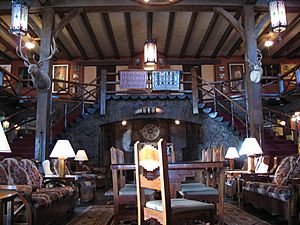