Crystal (Navajo: Tóniłtsʼílí) is a census-designated place (CDP) in McKinley and San Juan counties in the U.S. state of New Mexico. The population was 311 at the 2010 census. It is located at the western end of the Narbona Pass. 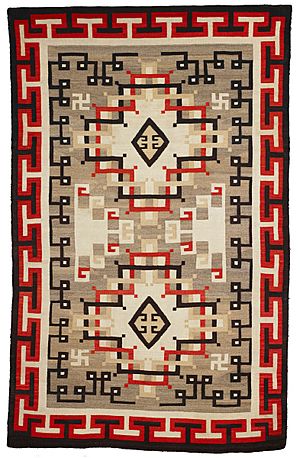 A Navajo wool rug in the Early Crystal style, including swastikas in the design, date 1900-1920 AD

The first known trader in the Washington Pass was Romulo Martinez, a Spanish-American from Fort Defiance, in 1873. The names of other traders are recorded for the following years, but they seem all to have been temporary, trading from tents in the summer season. In 1896 John Bradford Moore arrived, an Irishman from Sheridan, Wyoming. He bought the trading site, then cut timber in the mountains and hauled it down to build a log trading post, which he stocked with supplies carted from the rail head in Gallup. He named his post at the western mouth of the Narbona Pass the Crystal Trading Post. During the winter months, he employed Navajo weavers to make rugs. Moore ensured that the wool and the weaving was good quality, and created designs of his own, quickly gaining a reputation as a source of good quality rugs.

Moore understood what the market in the eastern United States would value, and in his catalog stressed the use of natural materials and primitive technology. Despite this, he introduced production-line techniques, and had no problem with using machine-produced yarns with synthetic dyes. Traders in Navajo rugs had to keep costs down to be able to offer competitive prices, so wages were low. Talking of the weaver's life, Moore said, "there is no more dismal wage proposition than her remuneration for her part in the industry. Given any other paying outlet for her labor, there would very soon be no such thing as a blanket industry ... it is her one and only way of earning money." Moore was succeeded in 1911 by his manager, A. J. Molohon. The Crystal Trading Post was owned by the C.C. Manning company from 1919 to 1922. Later Charlie Newcomb and then Jim Collyer owned the post. In 1944 Don Jensen bought the post, holding it until 1981. Apparently Jenson developed the current Crystal rug.

There were 100 households out of which 41.0% had children under the age of 18 living with them, 44.0% were married couples living together, 27.0% had a female householder with no husband present, and 23.0% were non-families. 21.0% of all households were made up of individuals and 8.0% had someone living alone who was 65 years of age or older. The average household size was 3.47 and the average family size was 4.10.

All content from Kiddle encyclopedia articles (including the article images and facts) can be freely used under Attribution-ShareAlike license, unless stated otherwise. Cite this article:
Crystal, New Mexico Facts for Kids. Kiddle Encyclopedia.