Farmington is located at the junction of the San Juan River, the Animas River, and the La Plata River, and is located on the Colorado Plateau. Farmington is the largest city of San Juan County, one of the geographically largest counties in the United States covering 5,538 square miles (14,340 km2). The county seat and the other city in San Juan County is Aztec. Farmington serves as the commercial hub for most of northwestern New Mexico and the Four Corners region of four states. Farmington lies at or near the junction of three important highways: U.S. Highway 550, U.S. Highway 64, and New Mexico Highway 371.

It is on the Trails of the Ancients Byway, one of the designated New Mexico Scenic Byways.

Farmington is known across New Mexico and throughout the southwest for its baseball tournaments, and Ricketts Park is the home of the Connie Mack World Series. Farmington High School claimed the AAAA Baseball State Championship four years in a row from 2005 through 2008. Piedra Vista High School in Farmington also claimed the AAAA Baseball State Championship in 2010 and 2011.

The area that is now Farmington was settled by Ancestral Pueblo people in the 7th Century. Ruins can be visited at nearby Salmon Ruins and at Aztec Ruins. When the Anasazi left the area, the Navajos, Jicarilla Apaches, and Utes moved into the area. A key part of the region was known in Navajo as "Totah", which means "where three rivers meet".

Although Spanish and American mineral prospecting happened in the area, there were few permanent settlements. In 1868, the Navajo Nation was created, taking up the western half of San Juan County. Six years later, the U.S. government offered territory in the rest of San Juan County to the Jicarilla Apache but they refused. As a result, the area was opened for settlement and a number of settlers moved into the region from Southern Colorado. The area was originally known as "Junction City" because of the access to the three rivers.

In 1901 the town was incorporated and named Farmington with a population of 548. By September 19, 1905, the railroad was finished connecting Farmington to Durango, Colorado, expanding economic and settlement opportunities. It was unusual in that it was a standard gauge railroad that connected to the Denver & Rio Grande Western narrow gauge lines of southwestern Colorado. The railroad converted the line to narrow gauge in 1923. The line was abandoned in 1968 and the line was dismantled to Durango in 1969. In addition, in the 1920s there was significant investment in natural gas and oil in the area, although actual production remained low until the 1950s. With construction of a developed road connecting Farmington to U.S. Route 66 and Albuquerque in the 1940s and the construction of the San Juan Basin Natural Gas Pipeline in 1953 – a venture led by Tom Bolack – the population expanded significantly. It grew from 3,637 in 1950 to 35,000 in 1953 and the expansion continued after that. However, the significant connection to the energy industry made the economics of the town largely vulnerable to international market fluctuations during the 1970s energy crisis and resulted in some economic diversification.

In 1967, as part of a joint U.S. Government-El Paso Electric operation, an underground nuclear detonation occurred 50 miles (80 km) east of Farmington and about 25 miles (40 km) south of Dulce, New Mexico in present-day Carson National Forest. This pilot project of Operation Plowshare, code-named Project Gasbuggy, was an attempt to fracture a large volume of underground bedrock to make more natural gas available for extraction by gas wells.

The people of Farmington have been the subject of several civil rights investigations, including the 2005 report, The Farmington Report: Civil Rights for Native Americans 30 Years Later.

On March 18, 1950, Farmington was the site of a mass UFO sighting in which over half the town's population was reported to have seen large saucers in the sky flying at rapid speeds.

On June 7, 2006, a chemical spill at Halliburton's Farmington facility created a toxic cloud that forced more than 200 people to evacuate their homes.

Farmington has a semi-arid climate. The city can experience hot summers and cold winters with low precipitation throughout the year. The average annual snowfall is 12.3 inches (0.31 m).

There were 16,466 households out of which 33.4% had children under the age of 18 living with them, 49% were married couples living together, 13.6% had a female householder with no husband present, and 30.1% were non-families. 21.7% of all households were made up of individuals and 8% had someone living alone who was 65 years of age or older. The average household size was 2.7 and the average family size was 3.19. 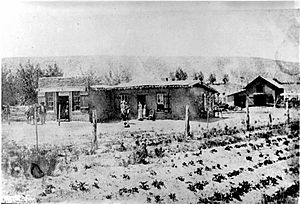 A.F. Miller store and home, Farmington, circa 1885, the first store in Farmington.

San Juan Plaza in Farmington is home to an annual strongman competition, which takes place the last Saturday of July.

Farmington holds a riverfest once a year. Area rivers are celebrated with a festival of music, fine arts, food, entertainment, a 10K and 5K run and walk, riverside trail walks, and river raft rides.

All content from Kiddle encyclopedia articles (including the article images and facts) can be freely used under Attribution-ShareAlike license, unless stated otherwise. Cite this article:
Farmington, New Mexico Facts for Kids. Kiddle Encyclopedia.