She started playing baseball, football, basketball and started snowboarding from the age of 5. While growing up in Farmington in northern New Mexico, Nichols would spend winters snowboarding in Colorado. During one such snowboarding trip in 2000, she attempted a back flip but over-rotated and landed back-first on a rock. The subsequent injury broke her T10/11 vertebra, and left her paralyzed from the waist down.

In 2002, Nichols was introduced to wheelchair basketball and quickly excelled at the sport. She received a scholarship to play with the University of Arizona, where she studied education.

After serving as an alternate for the U.S. women's team at the 2004 Summer Paralympics in Athens, was named to the national team in 2005, and helped the team win a silver medal in the 2006 Wheelchair Basketball World Championship.

She later attended graduate school at the University of Alabama, eventually graduating with a master's degree in kinesiology. Her Paralympic debut came in 2008 when, as part of the U.S. women's team, she won a gold medal in wheelchair basketball at the Beijing games.

One month after the Beijing Paralympics, Nichols moved from Alabama to Colorado to begin training in alpine skiing. She had tried adaptive skiing in 2002, but at the time had chosen to focus on basketball instead. 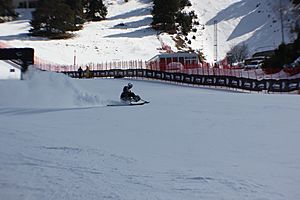 After watching the skiing events at the 2006 Winter Paralympics and learning of the National Sports Center for the Disabled (NSCD) in Winter Park, Colorado, she decided to pursue the sport as soon as the 2008 Summer Paralympics were completed. She began practicing with the NSCD program and showed quick improvement.

Her first win came in February 2009 when she beat Paralympic gold medalist Laurie Stephens to take first in the super-G at a North American Cup event in Kimberley, British Columbia. She won the downhill event and placed third in the super combined at the U.S. Adaptive Nationals later that year.

In March 2010, she completed her first IPC Alpine World Cup season with a first place in the downhill, second in super combined, and third in super-G. Later in March, she competed in the 2010 Winter Paralympic Games in Vancouver, BC, Canada where she won two gold medals, a silver medal and a bronze medal. She placed first in the downhill and the giant slalom, second in the super-G, and third in the super combined. Nichols is the first American woman with gold medals in the summer and winter games.

All content from Kiddle encyclopedia articles (including the article images and facts) can be freely used under Attribution-ShareAlike license, unless stated otherwise. Cite this article:
Alana Nichols Facts for Kids. Kiddle Encyclopedia.