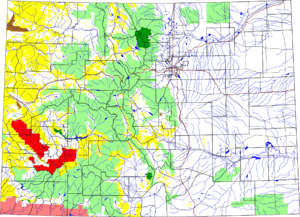 The Uncompahgre Plateau in western Colorado is a distinctive large uplift part of the Colorado Plateau. Uncompahgre is a Ute word that describes the water: "Dirty Water" or "Rocks that make Water Red".

The plateau, with an average elevation of 9,500 feet (2,900 m), rises from the Colorado River 4,600 ft (1,400 m) to Horsefly Peak 10,300 ft (3,100 m). It continues on about 90 miles (140 km) southeast to the northwest margin of the San Juan Mountains. Its boundaries are the San Miguel and Dolores Rivers to the west, the Colorado River to the north and the Gunnison and Uncompahgre Rivers on the eastern side. 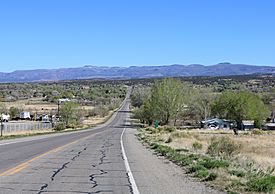 The Uncompahgre Plateau (the highest land in the back) rising above Nucla, Colorado.

The plateau is under the management of:

Located in Southwest Colorado, the Uncompahgre Plateau is a high domed upland rising from the Colorado River. When it was formed, strong forces in the crust of the Earth forced the land to lift up.

All content from Kiddle encyclopedia articles (including the article images and facts) can be freely used under Attribution-ShareAlike license, unless stated otherwise. Cite this article:
Uncompahgre Plateau Facts for Kids. Kiddle Encyclopedia.