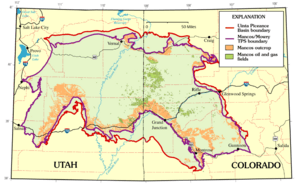 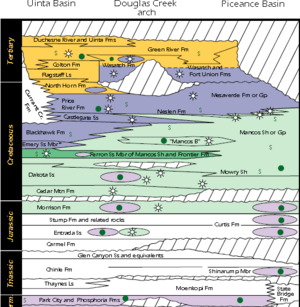 Stratigraphic column showing the relationship of the Mancos and Mowry shales

The Mancos Shale or Mancos Group is a Late Cretaceous (Upper Cretaceous) geologic formation of the Western United States.

The Mancos Shale was first described by Cross and Purington in 1899 and was named for exposures near the town of Mancos, Colorado.

It is dominated by mudrock that accumulated in offshore and marine environments of the Cretaceous North American Inland Sea. The Mancos was deposited during the Cenomanian (locally Albian) through Campanian ages, approximately from 95 Ma to 80 Ma.

Stratigraphically the Mancos Shale fills the interval between the Dakota Group and the Mesaverde Formation Group.

The Mancos Shale rests conformably on the Dakota and in its upper part grades into and intertongues with the Mesaverde Group. The shale tongues typically have sharp basal contacts and gradational upper contacts.

The Mancos occurs in the Basin and Range Province, the Colorado Plateau Province, and the San Juan Mountains Province.

It also occurs in the following structural basins:

All content from Kiddle encyclopedia articles (including the article images and facts) can be freely used under Attribution-ShareAlike license, unless stated otherwise. Cite this article:
Mancos Shale Facts for Kids. Kiddle Encyclopedia.