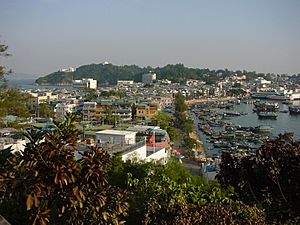 The village of Cheung Chau, viewed from the north. The bay of Tung Wan is on the left and Cheung Chau Typhoon Shelter is on the right.

Cheung Chau is located between Lamma Island and Lantau Island. 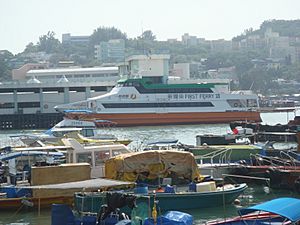 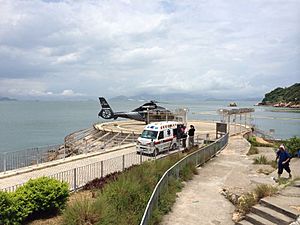 Geographically the island is formed from two mostly granite masses joined by a tombolo. With an area of 2.45 square kilometres (0.95 square miles), the island is therefore "long", hence the name as translated from Cantonese is "Long Island". Thus, it is redundant to say "Cheung Chau Island". The island is dumbbell-shaped, with hills at the northern and southern ends and the settlements concentrated in between.

The central part of the island is well developed with shops and houses. The lane-ways are so narrow that normal motor traffic is impossible. Instead, there are small motorised trucks officially termed "village vehicles". For example, there are small specially designed mini-fire engines, ambulances and police cars. Residential areas also exist on the hills of the north and south.

Traditionally the island was a fishing village and there are still fishing fleets working from the harbour. However, in recent years the island has become a major tourist attraction, offering a mixture of sandy swimming beaches, seafood cafés, and traditional Chinese culture. 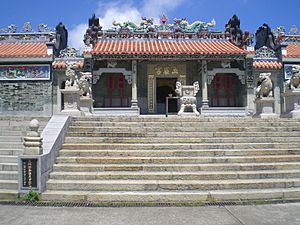 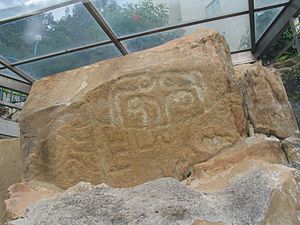 Temples on Cheung Chau include: 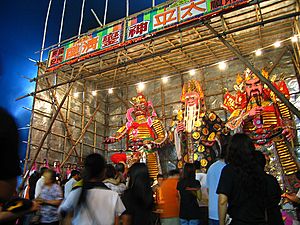 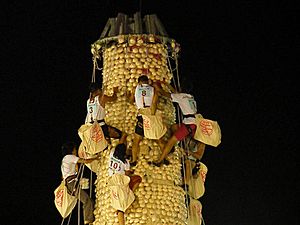 The annual Cheung Chau Bun Festival is a festival which includes a parade of floats, most famously including young children dressed as famous characters doing impossible balancing acts. It last three to four days and attracts tens of thousands of visitors to the island.

All content from Kiddle encyclopedia articles (including the article images and facts) can be freely used under Attribution-ShareAlike license, unless stated otherwise. Cite this article:
Cheung Chau Facts for Kids. Kiddle Encyclopedia.