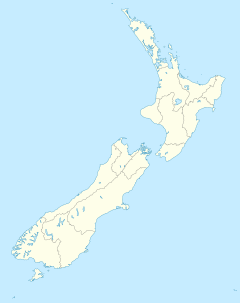 Cape Brett Peninsula, (Māori: Rākaumangamanga) is a peninsula on the northern North Island of New Zealand. It is 15 km long.

The head of the peninsula is Cape Brett; a promontory which extends north into the Pacific Ocean at the eastern end of the Bay of Islands. The Cape Brett Track beings in Rawhiti, at the Oke Bay Scenic Reserve Entrance. Sea Shuttle Bay of Islands provides a water taxi service from Oke Bay to Deep Water Cove for hikers to do the track one way.

A lighthouse stands at the end of the peninsula, which rises to 360 metres at its northern end. A noted landmark, the natural arch ('Hole in the Rock') of Piercy Island, lies about 500 metres off the cape.

A predator proof fence across the peninsula excludes the brushtail possum, an introduced animal pest, which feeds on the pohutukawa tree to such an extent that the tree can eventually die.

All content from Kiddle encyclopedia articles (including the article images and facts) can be freely used under Attribution-ShareAlike license, unless stated otherwise. Cite this article:
Cape Brett Peninsula Facts for Kids. Kiddle Encyclopedia.