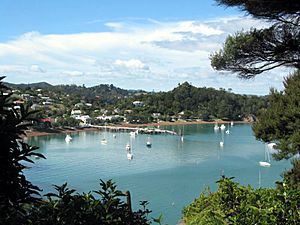 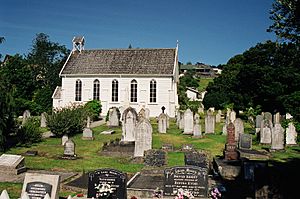 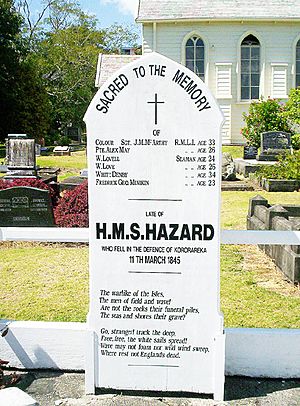 Memorial for Royal Navy personnel killed during the fighting in 1845. 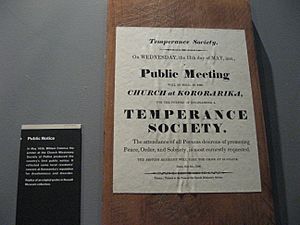 The first public notice in New Zealand was printed for Kororarika [sic], printed by William Colenso’s press in Paihia, across the Bay of Islands.

Russell, formerly known as Kororāreka, was the first permanent European settlement and sea port in New Zealand, and was briefly its first capital. It is situated in the Bay of Islands, in the far north of the North Island. As at the 2006 Census it had a resident population of 816, an increase of 12 from 2001. Much of the accommodation in the area consists of holiday homes or tourist accommodation.

When European and American ships began visiting New Zealand in the early 1800s, the indigenous Māori quickly recognised there were great advantages in trading with these strangers, whom they called tauiwi. The Bay of Islands offered a safe anchorage and had a high Māori population. To attract ships, Māori began to supply food and timber. What Māori wanted was respect, plus firearms, alcohol, and other goods of European manufacture.

Kororāreka developed as a result of this trade but soon earned a very bad reputation, a community without laws and became known as the "Hell Hole of the Pacific", despite the translation of its name being "How sweet is the penguin", (korora meaning blue penguin and reka meaning sweet). European law had no influence and Māori law was seldom enforced within the town's area. Fighting on the beach at Kororāreka in March 1830, between northern and southern hapū within the Ngāpuhi iwi, became known as the Girls’ War.

On 30 January 1840 at the Christ Church, Governor Hobson read his Proclamations (which were the beginnings of the Treaty of Waitangi) in the presence of a number of settlers and the Maori chief, Moka Te Kainga-mataa. A document confirming what had happened was signed at this time by around forty witnesses; including Moka, the only Maori signatory. The following week, the Treaty proceedings would then move across to the Western side of the bay to Waitangi.

By this time, Kororāreka was an important mercantile centre and served as a vital resupply port for whaling and sealing operations. When the Colony of New Zealand was founded in that year, Hobson was reluctant to choose Kororāreka as his capital, due to its bad reputation. Instead he purchased land at Okiato, situated five kilometres to the south, and renamed it Russell in honour of the Secretary of State for the Colonies, Lord John Russell. Captain Hobson soon decided that the move to the Okiato site was a mistake, and Auckland was selected as the new capital not long after.

Kororāreka was part of the Port of Russell and after Russell (Okiato) became virtually deserted, Kororāreka gradually became known as Russell also. In January 1844, Governor Robert FitzRoy officially designated Kororāreka as part of the township of Russell. Today the name Russell applies only to Kororāreka while the former capital is known either by its original name of Okiato or as Old Russell.

At the beginning of the Flagstaff War in 1845 (touched off by the repeated felling and re-erection of the symbol of British Sovereignty on Flagstaff Hill above the town), the town of Kororāreka/Russell was sacked by Hōne Heke, after diversionary raids drew away the British defenders. The flagstaff was felled for the fourth time at the commencement of the Battle of Kororāreka, and the inhabitants fled aboard British ships, which then shelled and destroyed most of the houses. Hōne Heke directed his warriors not to interfere with Christ Church and the Pompallier Mission.

In 1841–42, Jean Baptiste Pompallier established a Roman Catholic mission in Russell, which contained a printing press for the production of Māori-language religious texts. His building, known as Pompallier Mission, remains in the care of Heritage New Zealand.

A car ferry across the Bay of Islands runs between Okiato and Opua, and is the main tourist access to Russell. There is a land connection, but this requires a substantial detour.

Russell School is a coeducational full primary (years 1-8) school with a decile rating of 6 and a roll of 115. The school opened in 1892.

All content from Kiddle encyclopedia articles (including the article images and facts) can be freely used under Attribution-ShareAlike license, unless stated otherwise. Cite this article:
Russell, New Zealand Facts for Kids. Kiddle Encyclopedia.