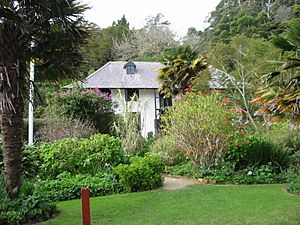 Pompallier House is a nineteenth-century building located in Russell, New Zealand which once served as the headquarters to the French Catholic mission to the Western Pacific. It is named after Jean Baptiste Pompallier, the first vicar apostolic to visit New Zealand, who founded a number of missions in the North Island. Pompallier House is owned and managed by Heritage New Zealand, who open it to the public. It is New Zealand's oldest Roman Catholic building, oldest rammed earth building, and oldest industrial building.

In 1836, Bishop Jean Baptiste Pompallier, along with the newly formed French order the Society of Mary (or Marists) received papal approval and were given the mission of Western Oceania. In 1838, Pompallier, along with three of these brothers arrived in Hokianga, on the West Coast of New Zealand, to begin their work in the country. Joined by other members of the order, they moved to the Bay of Islands to set up their headquarters in Kororareka (now Russell).

Bishop Pompallier bought land in Russell in 1839, and the building was constructed in 1841-2 for use as a printery, but the building also housed a tannery, for book-binding. In 1842, it produced its first Māori translations of religious texts.

There were a number of other buildings on the site, including a chapel, houses, kitchens and other outhouses, but the "Pompallier House" is the only one remaining.

In 1850 the mission headquarters moved to Auckland, and in 1856 James Callaghan took over the building, converting it to a residence known as "Callaghan's Castle". It passed through a number of private owners, who altered the original building, until the Government purchased the building in 1941. In the 1990s, it was fully restored to replicate its early condition. The building contains the original printing press, restored to working order, and the gardens remain as an example of the Victorian and Edwardian gardens typical of the latter owners.

Unable to bear the cost of purchasing much timber, the missionaries used the rammed earth construction common in Lyon, their original home. The earth was dug on site and supplemented with sand and rocks from the nearby beaches. Lime was made by burning shells. The upper floor was constructed with earth supported by timber frames. The work was supervised by architect Louis Perret. 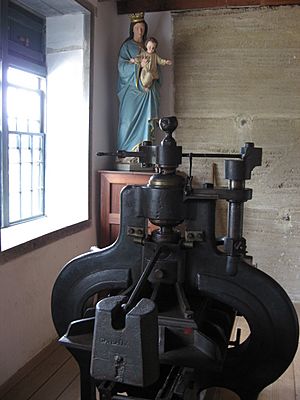 The Gaveaux printing press in the Pompallier House

The original Gaveaux printing press was brought to the mission from France in the early 1840s; between 1842 and 1849 it printed over 30,000 books and tracts, some of the first in Māori. After the mission left Russell in 1850 the press was amongst the belongings redistributed. In 1857 the Waikato Māori asked for the press, which was given to them by Bishop Pompallier. The press was used by Tāwhiao, the Māori King to print the Māori-language newspaper Te Paki o Matariki. The press remained in Waikato until the 1990s when it was returned to Pompallier by the Māori Queen Te Atairangikaahu.

Today, Pompallier Mission and Printery is open to the public seven days a week, with access to the building by guided tour only. Guided tours run four times a day (see website for details), from Monday - Sunday. The gardens are open all day, every day between 10am - 4pm. Garden visit tickets are available, to view the Victorian and Edwardian gardens, as well as access to the hillside parkland walk with beautiful views out over the bay.

There is also a French Coffee House on site which is open seven days a week from 9am, and offers a selection of French pastries, lunch items and a range of hot drinks.

All content from Kiddle encyclopedia articles (including the article images and facts) can be freely used under Attribution-ShareAlike license, unless stated otherwise. Cite this article:
Pompallier House Facts for Kids. Kiddle Encyclopedia.