Christ Church (Māori: Te Whare Karakia o Kororareka) is New Zealand's oldest surviving church. Built in 1835 in the village of Russell, the Anglican church originally held services in both English and Māori. It was also occasionally used as the local courthouse. On 30 January 1840, it was the site of Captain William Hobson's proclamation that New Zealand would be ruled through New South Wales and that he would serve as Lieutenant Governor of New Zealand. The cost of its construction was contributed to by Charles Darwin in 1863. The church was visited by Queen Elizabeth II and Prince Philip in 1963. The New Zealand Prime Minister David Lange and the country's Governor-General Sir Paul Reeves visited the church on its 150th anniversary in 1986. After a restoration in 2000, it was made into a tourist attraction.

The church was registered by the New Zealand Historic Places Trust (now called Heritage New Zealand) on 24 November 1983 as registration number 1, with a category I listing. 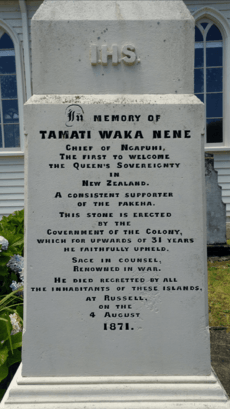 In the early 19th century, Russell, then known as Kororareka, was used as a safe harbour by whalers. The land for the church was purchased in 1834 from local chiefs on the condition that Māori and Pākehā (non-Māori) would have the same right to burial.

Although Charles Darwin on his 1835 visit described the town as a "stronghold of vice", he was impressed by the then near-completed church, which he saw as "a bold experiment". Darwin, Captain Fitzroy, and other officers of HMS Beagle are recorded as contributing to the church's construction.

The church was built in 1835 with a simple design and hipped roof. Initially, services were performed by missionaries who had to row across the harbour from Paihia. The first service was performed on 3 January 1836 by William Williams. During this time, services were conducted in English and Māori. The church also was occasionally used as the local courthouse.

Captain William Hobson, in a meeting on 30 January 1840 with both Māori and Pākehā, used the church to proclaim that New Zealand would be ruled through New South Wales and that he would serve as lieutenant governor. Further proceedings relating to the Treaty of Waitangi occurred across the harbour at Waitangi one week later.

The church was damaged in the Battle of Kororareka in 1845 by musket and cannonballs. Tāmati Wāka Nene, a Māori chief who fought for the British in that conflict, is buried in the church graveyard.

In the early 1870s, the church was given its current name and extended with a belfry.

In the early 20th century, Christ Church was served by vicars based at Kawakawa and from 1953 onwards, Kerikeri. In 1963 Queen Elizabeth II and Prince Philip visited the church, and in 1986 for its 150th anniversary Prime Minister David Lange and Sir Paul Reeves attended.

The church was registered by the New Zealand Historic Places Trust (now called Heritage New Zealand) on 24 November 1983 as registration number 1, with a category I listing. 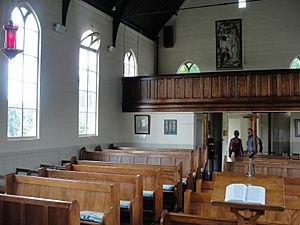 In 2000 the church was restored and is now also a tourist attraction. While no longer used as a parish church, it remains consecrated, and is a venue for weddings, funerals and other special services. It has been speculated that the church is the oldest building in New Zealand that is still being used for its original intended purpose.

In 2018 the first Anglican ordination of a New Zealander in an openly gay relationship occurred at Christ Church.

All content from Kiddle encyclopedia articles (including the article images and facts) can be freely used under Attribution-ShareAlike license, unless stated otherwise. Cite this article:
Christ Church, Russell Facts for Kids. Kiddle Encyclopedia.