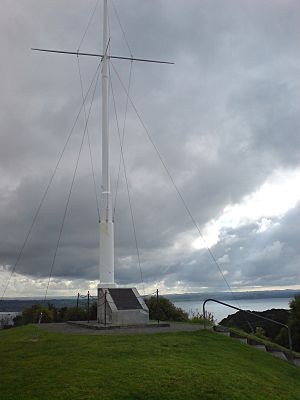 The modern-day flagstaff, remnant of the fifth flagstaff. 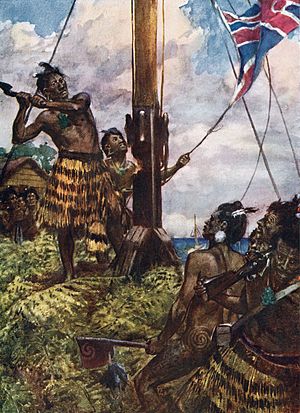 Flagstaff Hill (Maiki Hill) overlooks the Bay of Islands, New Zealand. Directly north of the small historical village of Russell, the flagstaff on the hill played a significant role in early relations between the local Māori of the Ngāpuhi iwi and early British colonials.

After the Treaty of Waitangi was signed in February 1840 at Waitangi, across the bay, relations between the Ngāpuhi and Pākehā (used by the Ngāpuhi to mean British European) began to deteriorate. Hone Heke, a local Māori chief, identified the flagstaff flying the Union Jack above the bay at Kororareka as the symbolic representation of the loss of control by the Ngāpuhi in the years following the signing of the Treaty. There are a number of causes of Heke's anger, such the fact that the capital of New Zealand had been moved from Okiato (Old Russell) to Auckland in 1841, and the colonial government had imposed customs duties on ships entering the Bay of Islands, these and other actions of the colonial government were viewed by Heke as reducing the trade between the Ngāpuhi with the foreigners. Traders in the Bay of Island also ferment trouble by saying that flag-staff, flying the Queen's flag; showed that the country [whenua] was gone to the Queen, and that the Ngāpuhi were no longer their own masters, but taurekareka (slaves) to Queen Victoria.

The flagstaff that now stands at Kororareka was erected in January 1858 at the direction of Kawiti's son Maihi Paraone Kawiti; with the flag being named Whakakotahitanga, “being at one with the Queen.” As a further symbolic act the 400 Ngāpuhi warriors involved in preparing and erecting the flagstaff were selected from the ‘rebel’ forces of Kawiti and Heke – that is, Ngāpuhi from the hapu of Tāmati Wāka Nene (who had fought as allies of the British forces during the Flagstaff War), observed, but did not participate in the erection of the fifth flagpole. The restoration of the flagpole was presented by Maihi Paraone Kawiti was a voluntary act on the part of the Ngāpuhi that had cut it down in 1845, and they would not allow any other to render any assistance in this work. The continuing symbolism of the fifth flagstaff at Kororareka is that it exists because of the goodwill of the Ngāpuhi.

The hill is a favoured destination for many of the tourists coming to Russell, with walking tracks leading up the hill, which provides sweeping views over the bay. The bush around the hill is also kiwi territory, though the birds are too shy to be seen by passing wanderers.

All content from Kiddle encyclopedia articles (including the article images and facts) can be freely used under Attribution-ShareAlike license, unless stated otherwise. Cite this article:
Flagstaff Hill (New Zealand) Facts for Kids. Kiddle Encyclopedia.