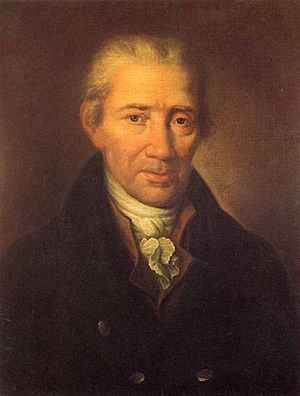 Johann Georg Albrechtsberger (born 3 February 1736 in Klosterneuburg near Vienna; died 7 March 1809 in Vienna) was an Austrian composer, organist, music theorist and music teacher. He is most known today because he was Beethoven’s teacher for a time.

From the age of seven, Albrechtsberger was a choirboy. He had lessons in organ and music theory. As an adult, he had several jobs in churches in small towns. He became Kapellmeister at St Stephen’s Church, Vienna in 1793. This was the best job for a church musician in the empire.

Albrechtsberger wrote hundreds of compositions. He wrote most of them before he got the job in Vienna. He wrote in a classical style. Albrechsberger enjoyed doing things with music which were not normally done. He would ask string players to tune their strings in different ways (called “scordatura”). He would also write slow movements with muted strings. As well as classical sonatas he wrote lots of fugues. Several people, including Mozart, thought of him as the greatest organist in the world.

Albrechtsberger was a very important music teacher. Joseph Haydn thought he was the best teacher in Vienna. He was very interested in contrapuntal music of the Baroque period. He copied many fugues by Bach and other composers.

All content from Kiddle encyclopedia articles (including the article images and facts) can be freely used under Attribution-ShareAlike license, unless stated otherwise. Cite this article:
Johann Georg Albrechtsberger Facts for Kids. Kiddle Encyclopedia.