Kids Encyclopedia Facts
This page is about the town. For other uses, see Thaxted (disambiguation).

Thaxted is a town and civil parish in the Uttlesford district of north-west Essex, England. The town is in the valley of the River Chelmer, not far from its source in the nearby village of Debden, and is 97 metres (318 feet) above sea level (where the parish church stands). The town is 15 miles (24 km) north from the county town of Chelmsford, and 5.5 miles (9 km) east from the M11 motorway. The parish contains the hamlets of Cutlers Green, Bardfield End Green, Sibleys Green, Monk Street, and Richmond's Green. Much of its status as a "town" rests on its prominent late medieval guildhall, a place where guilds of skilled tradesmen regulated their trading practices, and its English Perpendicular parish church.

Thaxted appears in the Domesday Book of 1086 as "Tachesteda", Old English for 'place where thatch was got.' Once a centre of cutlery manufacture, Thaxted went into decline with the rise of Sheffield as a major industrial centre. A light railway, the Elsenham & Thaxted Light Railway, eventually opened in 1913, though the railway itself never reached nearer than three-quarters of a mile (1.2 km) from the town, as building earthworks across the River Chelmer proved too costly. With the growth of road transport, the line was closed to passengers in 1952 and closed altogether in 1953. The name of Cutler's Green, a small hamlet about a mile to the west of Thaxted, recalls the trade that yielded the area's early wealth. To the West of Cutler's Green is an area named 'Richmond's in the Wood'.

Thaxted clubs and societies include Thaxted Morris which was founded in 1911 and is the oldest revival Morris dancing group in England. Thaxted Morris Men hosted the meeting at which the "Morris Ring" was formed as a national organisation in 1934; and continue to host one of their meetings every year: in 2009 this was a celebration of the Ring's 75th anniversary.

The annual Thaxted Festival takes place over four weekends in June and July every year, presenting a programme of musical concerts.

Thaxted football club, the Thaxted Rangers, has a senior team and youth teams.

The parish church of St John, built between 1340 and 1510, is renowned for its flying buttressed spire, which is 181 feet tall and is the only medieval stone spire in the county. It has perpendicular windows and a stained glass representing Adam and Eve. The church, which stands on a hill and overlooks the town, is often referred to as "the Cathedral of Essex". From 1910 to 1942, the vicar was Conrad Noel, known as the 'Red Vicar' because of his well-known Christian Socialism.

Thaxted County Primary School was established in 1878 under the 1870 Education Act. It still occupies the fine Victorian building on the eastern edge of the town built for it in 1880 and is run by Essex County Council.

Thaxted lies within the secondary education catchment area for the Helena Romanes School in Great Dunmow.

There are a number of preschools in the area.

The 1556 Borough Charter provided for setting up a grammar school. This occupied the Guildhall from 1714 until it closed in 1878. A day school, operated by the Church of England, opened in 1819 and was housed in a building funded by Lord Maynard on the Broxted Road. The non-conformists established a rival British School in Bolford Street in 1856. Both schools ceased to operate when the Primary School was established in 1878.

From 1944 to 1962, the Bachad Farm Institute, located on a farm at Bardfield End Green, provided agricultural training to young Jewish refugees, including many from the Kindertransport, as part of a network of hakhshara youth training farms. 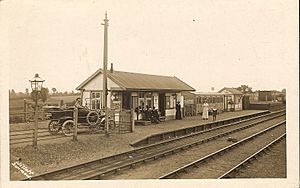 Thaxted Railway Station, which closed in 1952.

Thaxted once lay on the busy A130 trunk road from Chelmsford to Cambridge which brought large trucks through the centre of the town past the Guildhall and Church. In the 1980s, this route was downgraded to become the B184 road following completion of the M11 motorway and the A120 dual carriageway. Ordnance Survey maps show a roman road running north to south through Thaxted.

Thaxted is connected to the local towns and villages, as well as to Stansted Airport, by local bus services, operated by Stephensons of Essex. Uttlesford District Council runs a community travel service for residents who have difficulty using public transport.

From 1913 to 1952, Thaxted was served by a light railway branch line from Elsenham which ran to a terminus station located about one mile south of the town. The line, the Elsenham & Thaxted Light Railway, was known to locals as the "Gin and Toffee" line because the main investors where a local sweet factory owner and a distillery magnate. Passenger traffic ceased on 15 September 1952 and the line closed definitively on 1 June 1953.

Between 1916 and 1919, Thaxted hosted a Home Defence aircraft landing ground. The unit was equipped with Royal Aircraft Factory BE2 and BE12 variants fighters of No. 75 Squadron until the summer of 1918, and thereafter with Avro 504Ks and Bristol F2bs. The site was decommissioned at the end of the First World War in 1919. The landing ground was located north of Bardfield End Green. 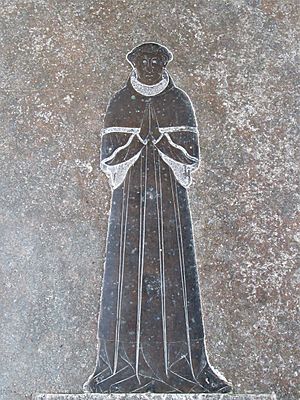 A brass in Thaxted Church is reputed to be Robert Wydow.

All content from Kiddle encyclopedia articles (including the article images and facts) can be freely used under Attribution-ShareAlike license, unless stated otherwise. Cite this article:
Thaxted Facts for Kids. Kiddle Encyclopedia.