John Webb’s or Lowe’s Mill is a Grade II* listed tower mill at Thaxted, Essex, England, which had been restored to working order, but is currently out of action following the loss of a sail in April 2010. 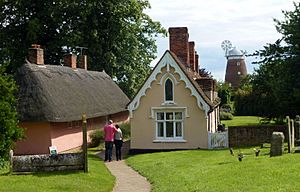 Almshouses at the parish church of St John, with the sailless John Webb's Windmill in the background, in July 2012.

The windmill was built in 1804 for John Webb, a local farmer and landowner, to satisfy the increasing demand for flour both locally and in London. It was constructed using local materials, with timber from two local farms and bricks made at a nearby location in the Chelmer Valley also owned by John Webb.

The mill was always worked by millers named Lowe or John Webb, thus gaining its names. The mill was last worked commercially in 1910. The mill was disused for over twenty years until the Thaxted Civic Trust carried out essential repairs and made the structure waterproof. The lower floors were used as a scout hut. The mill passed into the ownership of Thaxted Parish Council in the 1950s. The Thaxted Society, formed in 1964, has been instrumental in the restoration of the mill to full working order.

In 2004, the cap and sails were removed to enable repairs to the brickwork at the top of the tower. The repairs were completed by the end of the year. The mill was officially reopened on 8 April 2005 by Lord Petre. On 5 April 2010, the stock of one pair of sails broke, and the sail crashed to the ground, damaging the stage as it fell. There were no injuries among the six or seven visitors in the mill at the time. On the ground and first floors there is a rural museum containing agricultural artifacts.

The mill is open in the afternoon on Sundays and Bank Holidays from May to September and at other times by appointment.

The windmill briefly reached an international audience when it was used in a scene in Passolini's 1972 adaptation of The Canterbury Tales. The mill, in its dilapidated state prior to restoration, provides a backdrop to the conversation between the Summoner, the Devil and the Old Woman in The Friar's Tale. The use of a 19th century tower mill in a depiction of medieval England is anachronistic.

All content from Kiddle encyclopedia articles (including the article images and facts) can be freely used under Attribution-ShareAlike license, unless stated otherwise. Cite this article:
John Webb's Mill, Thaxted Facts for Kids. Kiddle Encyclopedia.