Robert Seymour Bridges OM (23 October 1844 – 21 April 1930) was an English poet who was Poet Laureate from 1913 to 1930. A doctor by training, he achieved literary fame only late in life. His poems reflect a deep Christian faith, and he is the author of many well-known hymns. It was through Bridges' efforts that Gerard Manley Hopkins achieved posthumous fame.

"The Evening Darkens Over"

The evening darkens over
After a day so bright,
The windcapt waves discover
That wild will be the night.
There's sound of distant thunder.

The latest sea-birds hover
Along the cliff's sheer height;
As in the memory wander
Last flutterings of delight,
White wings lost on the white.

There's not a ship in sight;
And as the sun goes under,
Thick clouds conspire to cover
The moon that should rise yonder.
Thou art alone, fond lover.

Bridges was born at Walmer, Kent, in England, the son of John Thomas Bridges (died 1853) and his wife Harriett Elizabeth, daughter of the Rev. Sir Robert Affleck, 4th Baronet. He was the fourth son and eighth child. After his father's death his mother married again, in 1854, to John Edward Nassau Molesworth, vicar of Rochdale, and the family moved there.

Bridges was educated at Eton College and Corpus Christi College, Oxford. He went on to study medicine in London at St Bartholomew's Hospital, intending to practise until the age of forty and then retire to write poetry. He practised as a casualty physician at his teaching hospital (where he made a series of highly critical remarks about the Victorian medical establishment) and subsequently as a full physician to the Great (later Royal) Northern Hospital. He was also a physician to the Hospital for Sick Children.

Lung disease forced Bridges to retire in 1882, and from that point on he devoted himself to writing and literary research. However, Bridges' literary work started long before his retirement, his first collection of poems having been published in 1873. In 1884 he married Mary Monica Waterhouse, daughter of the architect Alfred Waterhouse R.A., and spent the rest of his life in rural seclusion, first at Yattendon, then at Boars Hill, Berkshire (close to Oxford), where he died.

He was elected to the Fellowship of the Royal College of Physicians of London in 1900. He was appointed Poet Laureate in 1913, the only medical graduate to have held the office.

He was the father of poet Elizabeth Daryush and of the cabinet secretary Edward Bridges. 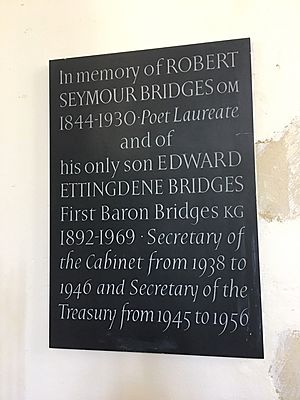 As a poet Bridges stands rather apart from the current of modern English verse, but his work has had great influence in a select circle, by its restraint, purity, precision and delicacy yet strength of expression. It embodies a distinct theory of prosody. Bridges' faith underpinned much of his work.

In the book Milton's Prosody, he took an empirical approach to examining Milton's use of blank verse, and developed the controversial theory that Milton's practice was essentially syllabic. He considered free verse to be too limiting, and explained his position in the essay "Humdrum and Harum-Scarum". His own efforts to "free" verse resulted in the poems he called "Neo-Miltonic Syllabics", which were collected in New Verse (1925). The metre of these poems was based on syllables rather than accents, and he used the principle again in the long philosophical poem The Testament of Beauty (1929), for which he was appointed to the Order of Merit in that year. His best-known poems, however, are to be found in the two earlier volumes of Shorter Poems (1890, 1894). He also wrote verse plays, with limited success, and literary criticism, including a study of the work of John Keats.

"Melancholia"
The sickness of desire, that in dark days
Looks on the imagination of despair,
Forgetteth man, and stinteth God his praise;
Nor but in sleep findeth a cure for care.
Incertainty that once gave scope to dream
Of laughing enterprise and glory untold,
Is now a blackness that no stars redeem,
A wall of terror in a night of cold.

Fool! thou that hast impossibly desired
And now impatiently despairest, see
How nought is changed: Joy's wisdom is attired
Splended for others' eyes if not for thee:
Not love or beauty or youth from earth is fled:
If they delite thee not, 'tis thou art dead.

Bridges' poetry was privately printed in the first instance, and was slow in making its way beyond a comparatively small circle of his admirers. His best work is to be found in his Shorter Poems (1890), and a complete edition (to date) of his Poetical Works (6 vols.) was published in 1898–1905.

Despite being made poet laureate in 1913, Bridges was never a very well-known poet and only achieved his great popularity shortly before his death with The Testament of Beauty. However, his verse evoked response in many great British composers of the time. Among those to set his poems to music were Hubert Parry, Gustav Holst and later Gerald Finzi.

During the First World War, Bridges joined the group of writers assembled by Charles Masterman as part of Britain's War Propaganda Bureau at Wellington House.

At Oxford, Bridges befriended Gerard Manley Hopkins, who is now considered a superior poet but who owes his present fame to Bridges' efforts in arranging the posthumous publication (1918) of his verse.

Bridges received advice from the young phonetician David Abercrombie on the reformed spelling system he was devising for the publication of his collected essays (later published in seven volumes by Oxford University Press, with the help of the distinguished typographer Stanley Morison, who designed the new letters). Thus Robert Bridges contributed to phonetics and he was also a founder member of the Society for Pure English.

Bridges made an important contribution to hymnody with the publication in 1899 of his Yattendon Hymnal, which he created specifically for musical reasons. This collection of hymns, although not a financial success, became a bridge between the Victorian hymnody of the last half of the 19th century and the modern hymnody of the early 20th century.

Bridges wrote and also translated historic hymns, and many of these were included in Songs of Syon (1904) and the later English Hymnal (1906). Several of Bridges' hymns and translations are still in use today:

Dates given are of first publication and significant revisions.

All content from Kiddle encyclopedia articles (including the article images and facts) can be freely used under Attribution-ShareAlike license, unless stated otherwise. Cite this article:
Robert Bridges Facts for Kids. Kiddle Encyclopedia.