Boars Hill is a hamlet 3 miles (5 km) southwest of Oxford, straddling the boundary between the civil parishes of Sunningwell and Wootton. Historically part of Berkshire until the 1974 boundary changes transferred it to Oxfordshire.

Until the late 19th century the hill was almost bare and had fine views - northwards to the city of Oxford, southwards to the Downs and westwards to the upper Thames valley. At that time many houses were built on Boars Hill, and the new residents planted trees and erected fences and walls; within a few decades they had hidden the celebrated views from all but a few places.

Boars Hill does not have its own Church of England parish church. As it straddles two parishes the respective parts of Boars Hill are served by St. Peters, Wootton and St. Leonard's, Sunningwell. 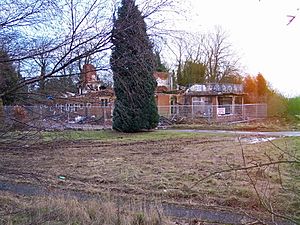 Remains of Yatscombe Hall in January 2004

Arthur Evans had Jarn Mound built (by hand), built to create a viewpoint from which to see the famous vistas that had been hidden by development. The surrounding trees have continued to grow taller, and the views are again obscured. Evans left most of his estate to the Boy Scouts and Youlbury Camp is still available for their use.

Several sites on Boars Hill, including Jarn Mound, Matthew Arnold Field and land on the north side of the hill with views of the "dreaming spires" of Oxford, are now owned by the Oxford Preservation Trust.

From 1933 to 1975 Boars Hill was the home of Ripon Hall. When Ripon Hall moved to Cuddesdon, the site became known as Foxcombe Hall, and was the regional headquarters of the Open University. In 2016 the site was purchased by Peking University.

From 1976 to 1996, Warnborough College, occupied the former Plater College facilities, the Bishop's palace of the Diocese of Oxford, and Yatscombe Hall, having moved from Warnborough Road in North Oxford. The college attracted controversy due to alleged links to Oxford University and was eventually sued with the site repossessed.

Soon after the repossession squatters moved in and the site of the former Bishop's palace and Yatscombe Hall has been subject to numerous planning disputes ever since. Yatscombe Hall was destroyed by fire in December 2003 and all the buildings on the site were demolished and a retirement village was planned. However eventually a development of a four large country homes was built on the site by Millgate Homes.

First, Cousin Jasper advises the young Charles Ryder upon his coming up to Oxford to "...Keep clear of Boar's Hill."

In contrast, Sebastian Flyte describes a model student at Oxford as one who "smokes a great pipe and plays hockey and goes out to tea on Boar's Hill and to lectures at Keble..."

All content from Kiddle encyclopedia articles (including the article images and facts) can be freely used under Attribution-ShareAlike license, unless stated otherwise. Cite this article:
Boars Hill Facts for Kids. Kiddle Encyclopedia.