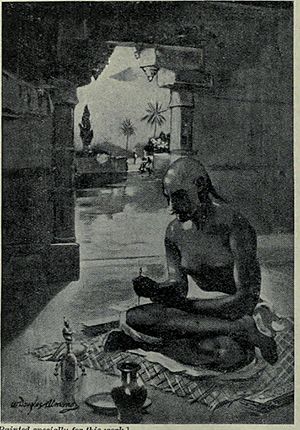 Kālidās was the author of Meghadoot, Shākuntal, and other works in Sanskrit. He has a similar place in Sanskrit as a poet and a dramatist, as Shakespeare in English.

Kālidās's plays and poetry are based on Hindu mythology and philosophy.

Kālidās wrote two very good epic poems, Raghuvamsha ("Dynasty of Raghu") and Kumārasambhawa ("Birth of Kumar Kartikeya"), and the lyrical Meghadoota ("Cloud Messenger") and Rutusamhāra ("The Exposition on the Seasons").

Kālidāsa's work was one of the first works of Indian literature to become known in Europe.

There is very little known about the life of Kālidās. It is not clear where he lived, and the time range when he might have lived lasts from 130 BC to 600 CE.

All content from Kiddle encyclopedia articles (including the article images and facts) can be freely used under Attribution-ShareAlike license, unless stated otherwise. Cite this article:
Kālidāsa Facts for Kids. Kiddle Encyclopedia.