Rings of Uranus facts for kids 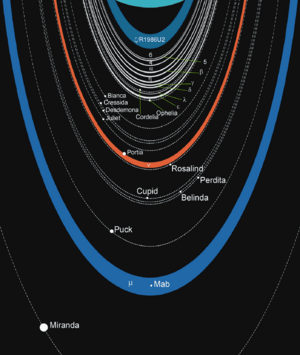 Scientists think that the rings are at not more than 600 million years old. The ring system was created when several moons crashed together. After crashing, the moons broke up into many pieces and made rings.People may discover more rings.

All content from Kiddle encyclopedia articles (including the article images and facts) can be freely used under Attribution-ShareAlike license, unless stated otherwise. Cite this article:
Rings of Uranus Facts for Kids. Kiddle Encyclopedia.