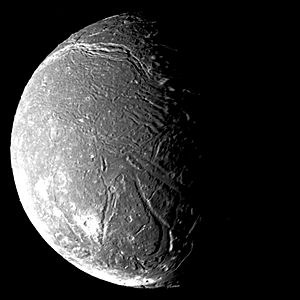 Image of Ariel obtained by Voyager 2 in 1986

Ariel is a moon of Uranus found on October 24, 1851 by William Lassell. It was found at the same time as Umbriel.

The moon is named after the leading sylph in Alexander Pope's poem Rape of the Lock. It is also the name of the spirit who serves Prospero in Shakespeare's The Tempest.

All content from Kiddle encyclopedia articles (including the article images and facts) can be freely used under Attribution-ShareAlike license, unless stated otherwise. Cite this article:
Ariel (moon) Facts for Kids. Kiddle Encyclopedia.