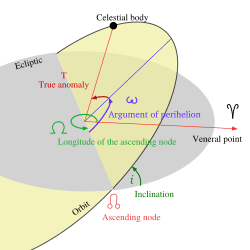 A diagram of Keplerian orbital elements.

In astronomy, an apsis (plural apsides) is the point of greatest or least distance of the elliptical orbit of an astronomical object from its center of attraction, which is generally the center of mass of the system.

The point of closest approach is called the periapsis or pericentre and the point of farthest excursion is called the apoapsis (Greek από, from, which becomes απ before a vowel, and αφ before rough breathing), apocentre or apapsis (the latter term, although etymologically more correct, is much less used). A straight line drawn through the periapsis and apoapsis is the line of apsides. This is the major axis of the ellipse, the line through the longest part of the ellipse.

Similar words are used to identify the body being orbited:

All content from Kiddle encyclopedia articles (including the article images and facts) can be freely used under Attribution-ShareAlike license, unless stated otherwise. Cite this article:
Apsis Facts for Kids. Kiddle Encyclopedia.