Kīlauea is an active shield volcano in the Hawaiian Islands, and the most active of the five volcanoes that together form the island of Hawaii. Located along the southern eastern shore of the island, the volcano is between 210,000 and 280,000 years old and emerged above sea level about 100,000 years ago.

It is the second youngest product of the Hawaiian hotspot and the current eruptive center of the Hawaiian–Emperor seamount chain. Structurally, Kīlauea has a large, fairly recently formed volcanic craters at its summit and two active rift zones. 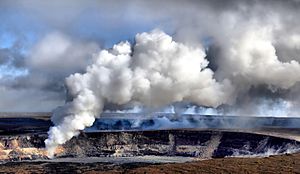 Kīlauea erupted nearly continuously from 1983 to 2018, causing considerable property damage, including the destruction of the towns of Kalapana in 1990, and Vacationland Hawaii and Kapoho in 2018. During the 2018 lower Puna eruption, which began on May 3, two dozen lava vents erupted. The eruption was accompanied by a strong earthquake on May 4 and nearly 2,000 residents were evacuated from the rural Leilani Estates subdivision and nearby areas.

On May 17, 2018 at 4:17 AM, the volcano explosively erupted at the summit in Halemaumau Crater, throwing ash 30,000 feet into the air. Continued explosive activity at the summit caused a months-long closure of the Kīlauea section of Hawaii Volcanoes National Park, while vigorous eruptive activity in lower Puna and sent lava into the ocean in three places. 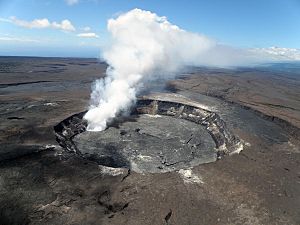 The plume rising from the Halemaumau vent

The County of Hawaii reported that 716 dwellings were destroyed by lava. By early August the eruption subsided substantially, and the last active lava was reported at the surface on September 4, 2018. Portions of Hawaii Volcanoes National Park reopened to the public on September 22. On December 5, 2018, after 90 days of inactivity from the volcano, the eruption that started in 1983 was declared to be over. 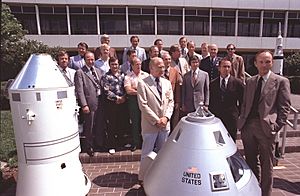 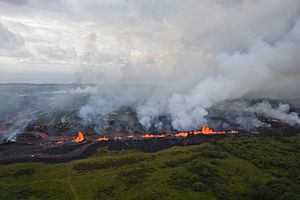 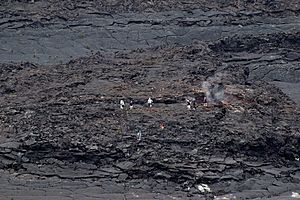 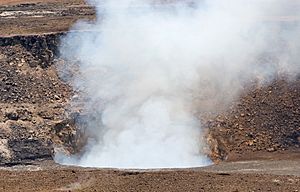 In its early days, tourism was a relatively new concept, but grew slowly before exploding with the advent of air travel around 1959, the year Hawaii became a state. Today, tourism is driven by the island's exotic tropical locations, and Kīlauea, being one of the few volcanoes in the world in a more or less constant state of moderate eruption, was a major part of the island's tourist draw.

Until its closure on May 11 due to the danger and damage associated with the 2018 Lower East Rift Zone and summit events, Kīlauea was visited by roughly 2.6 million people annually, most of whom proceeded to visit the volcano from the Kilauea Visitor Center near the park entrance.

The Thomas A. Jaggar Museum was also a popular tourist stop, the museum's observation deck offered the best sheltered view on the volcano. A number of hiking trails, points of interest, and guided ranger programs existed.

All content from Kiddle encyclopedia articles (including the article images and facts) can be freely used under Attribution-ShareAlike license, unless stated otherwise. Cite this article:
Kilauea Facts for Kids. Kiddle Encyclopedia.