The Hawaiʻi ʻamakihi (Chlorodrepanis virens), also known as the common ʻamakihi, is a species of Hawaiian honeycreeper.

The Hawaiʻi ʻamakihi was formerly placed in the genus Hemignathus but was assigned to the genus Chlorodrepanis based on the phylogenetic analysis of mitochondrial and nuclear DNA sequences.

There are two recognized subspecies: C. v. wilsoni on Maui, Molokaʻi, and (formerly) Lānaʻi, and C. v. virens on the Big Island of Hawaiʻi.

The Hawaiʻi ʻamakihi is a small bird, measuring about 10 centimetres (3.9 in) in length. It is yellow-green with a small black bill that is 1.3 centimetres (0.51 in) long and has brown eyes with black pupils. 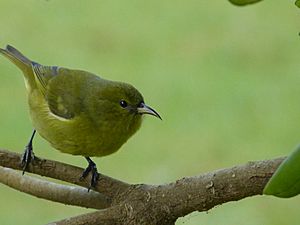 The primary song of the Hawaiʻi ʻamakihi is a rapid trill.

The Hawaiʻi ʻamakihi has a very wide diet, and has been able to find food despite habitat alteration. It has a tubular tongue, which it uses to drink nectar from flowers such as those of the ʻōhiʻa lehua (Metrosideros polymorpha), ʻākala (Rubus hawaiensis), and māmane (Sophora chrysophylla). If necessary, it will suck juice from fruits. The Hawaiʻi ʻamakihi also hunts for spiders and insects among trees and shrubs.

Hawaiʻi ʻamakihi are a productive species with a long breeding season, lasting about 9 months. On the Big Island, Maui and Molokaʻi there is variation in when that breeding season starts but it may coincide with flowering of mämane in dry mämane forests. Hawaiʻi ʻamakihi nest in the canopy of trees. They often are able to have two broods within a breeding season; having two rounds of chicks enables their population to increase more rapidly than slow growing species like the endangered Kiwikiu. Chicks remain in the nest for 15-21 days before they fledge. Young Hawaiʻi ʻamakihi become independent from their parents at 2-3 months.

It is found on the Big Island, Maui, and Molokaʻi in Hawaii. It formerly occurred on Lānaʻi where it was last seen in 1976. It is one of the most common honeycreepers, inhabiting all types of habitat, dry mämane forests to mesic and wet forests, on the islands at elevations from sea level to 8,000 feet (2,400 m). On Maui they have also been successful in forests of introduced pines, cypresses and firs. Of all the forest birds native to Hawaii, the Hawaiʻi ʻamakihi has been affected the least by habitat changes. It is suspected that it is evolving resistance to diseases such as avian malaria. Along with the ʻApapane, it is one of the two Hawaiian honeycreepers listed by the IUCN as being of least concern.

All content from Kiddle encyclopedia articles (including the article images and facts) can be freely used under Attribution-ShareAlike license, unless stated otherwise. Cite this article:
Hawaiʻi ʻamakihi Facts for Kids. Kiddle Encyclopedia.