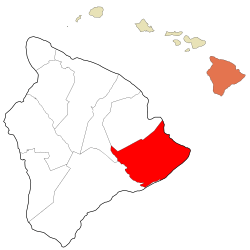 The Island of Hawaiʻi is divided into 9 Lava Flow Hazard Zones, which are unrelated to, and not to be confused with, the 9 District "zones". These Lava Flow Hazard Zones are numbered according to the degree of hazard from inundation by lava flows. Zone 1 is the area of the "greatest" hazard, where lava is most likely to come from the ground, and coincides with the rift zones of the two most active volcanoes (Mauna Loa and Kīlauea). Zone 9, consisting of the extinct volcano Kohala, is the area considered to be of the least hazard, since this area has not had any lava flows in thousands of years. Lava Hazard Zones in Puna are all Lava Hazard Zones 1, 2 and 3; the most dangerous according to the USGS.

Puna is one of the 9 districts of Hawaii County on the Island of Hawaiʻi (Big Island; County of Hawaiʻi). It is located on the windward side (east side) of the island and shares borders with South Hilo district in the north and Kaʻū district in the west. With a size of just under 320,000 acres (1,300 km2) or 500 sq. miles. Puna is slightly smaller than the island of Kauaʻi.

Puna cropland supports floriculture, nurseries and macadamia nuts. Most of the state’s papayas crops are grown in the lower Puna area which is regarded as the best place in the Islands to grow the crop.

The climate is a mild tropical climate with abundant rainfall, especially in the northern parts and areas of higher elevation. The terrain is characterized by gentle slopes with no defined waterways. Although rainfall is occasionally very heavy (one storm in 2003 brought 36 inches (90 cm) of rain in 24 hours), flooding is rare due to the slope and porosity of the volcanic rock. The vegetation ranges from rainforest to desert shrub and coastal strand. Large areas of native forest are present in the Wao Kele o Puna and Kahauala tracts.

The current eruption has been going on since 1983. Recent Kilauea Status Reports, Updates, and Information Releases are published daily by the Hawaii Volcano Observatory Historic photos and details of previous flows are also available on that website.

As of October 4, 2014, the "Current Volcano Alert Level" was set at "WARNING", due to lava flowing towards the village of Pahoa.

Hawaii Volcanoes National Park, when constructed, had two entrances. The entrance from lower Puna was cut off in 1986, and several miles of the road along the ocean were covered by several flows that occurred over the course of the eruption. Tourists are particularly interested in observing the lava when it is flowing into the ocean and where they can get a close look. To find out where the flow is currently going and best places to park, consult the links provided.

Lava flows have continued to add new land to the old shoreline in an intermittent fashion, with lava constantly changing directions and sometimes relocating into new areas. The lava itself and the new land it creates can be hazardous, and anyone visiting the area should consult publication Volcanic Hazards on the Island of Hawai`i

In June 2014, a lava flow dubbed the June 27th flow started flowing from a vent of a spatter cone called Pu'u O'o on the east rift zone of Kilauea Volcano in a northwest direction towards the villages of Kaohe Homesteads and Pahoa.

In early September it appeared that the lava flow was en route to the small community of Kaohe Homesteads. Community leaders and state officials began to draw up plans for evacuations and the mayor signed an emergency proclamation as residents of the Kaohe Homesteads subdivision learned that lava from Kilauea Volcano was just 0.8 of a mile away and could reach them within a week. On September 13, a release from the Hawaiian Volcano Observatory stated that the flow had begun to shift away from the subdivision as it had interacted with both the cracks and down-dropped blocks within the East Rift Zone of Kīlauea volcano and a natural valley that leveled away from Kaohe Homesteads.

The lava flow was now heading towards the community of Pahoa, Hawaii. On October 25, the flow had crossed Cemetery Road at Apa'a Road near the Pahoa Recycling and Transfer Station, a waste/trash station, which was closed and relocated due to the lava flow. The flow was quickly advancing on a nearby cemetery and triggered the first series of evacuations. On November 10, the flow claimed the first (but only) home.

Officials feared that if the lava flow continued on its path it will cover over the only route in and out of lower Puna, Highway 130. On October 22, The National Park Service announced that it would help state and county officials create an emergency route along 8 miles of the buried Chain of Craters Road in order to help Puna residents who will lose access to the rest of Hawai‘i if the current lava flow covers Highway 130. Construction of the Chain of Craters alternate route began by making a path over a wall of lava rock covering the road in Hawaii Volcanoes National Park. The $12 million to $15.5 million route, to be re-established between the park and Kalapana as a gravel road, would have been the only road in and out of lower Puna, if the June 27 lava flow had made its way to the sea. The park closed the end of Chain of Craters Road as construction began. Nearly 8 miles of the roadway, officially known as Chain of Craters Road inside the park and Highway 130 outside of it, is covered by past flows from the ongoing Pu'u O'o eruption that threatened Pahoa. Chain of Craters Road, which opened in 1965, had portions blocked or covered by lava for 37 years of its 49-year existence, according to the park. The road is about 19 miles long inside the park. However the 2014 lava flow did not continue further.

Census-designated places and other areas within Puna

Besides visiting the active Kīlauea volcano and the currently active lava flows in the area of Kalapana, another interesting site within the Puna district are the heated tide pools at Ahalanui Beach Park (aka Puʻalaʻa County Park), where spring water has been naturally heated through geothermal energy and this mixes with ocean water along the shoreline. Prior to the eruption in 1960 at Kapoho, the pools were not heated but were cold.

All content from Kiddle encyclopedia articles (including the article images and facts) can be freely used under Attribution-ShareAlike license, unless stated otherwise. Cite this article:
Puna, Hawaii Facts for Kids. Kiddle Encyclopedia.