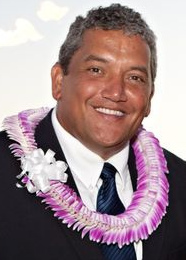 William P. Kenoi (November 1968 – January 26, 2021) was an American Democratic politician. Kenoi was Mayor of Hawaii County from 2008 to 2016. He was a legislative aide in the State House and State Senate. He was born in Kalapana, Hawaii.

All content from Kiddle encyclopedia articles (including the article images and facts) can be freely used under Attribution-ShareAlike license, unless stated otherwise. Cite this article:
Billy Kenoi Facts for Kids. Kiddle Encyclopedia.