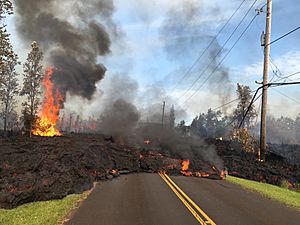 Lava from a fissure slowly advanced to the northeast on Hoʻokāpu Street in Leilani Estates subdivision (May 5, 2018)

As of May 6, 2018, the eruption has caused in the destruction of 26 houses. This volcanic event is the 62nd episode of the ongoing east rift zone eruption that began in January 1983.

The Civil Defense Agency reported extreme levels of sulphur dioxide gas in the area, and Talmadge Magno, the Civil Defense Administrator for Hawaii County, stated that power lines had melted off the poles due to heat.

By May 25, 2018, over 20 fissures had erupted lava in or near the Leilani Estates and Lanipuna Gardens subdivisions, resulting in the destruction of at least 82 structures in lower Puna. The eruption forced the evacuation of about two thousand residents.

All content from Kiddle encyclopedia articles (including the article images and facts) can be freely used under Attribution-ShareAlike license, unless stated otherwise. Cite this article:
2018 lower Puna eruption Facts for Kids. Kiddle Encyclopedia.