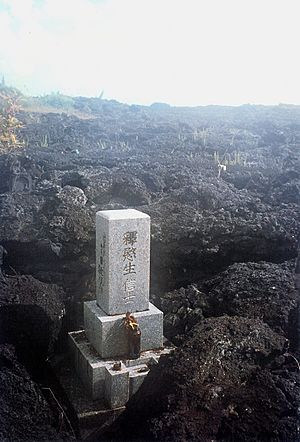 Kapoho, Hawaii, is a now-uninhabited unincorporated area in Puna district, Hawaii County, Hawaii, located near the eastern tip of the island of Hawaii, in the easternmost subaerial end of the graben overlying Kīlauea's east rift zone. Originally destroyed by an eruption of Kīlauea in 1960, it was rebuilt as a community of private homes and vacation rentals. In the eruption that began in May 2018, the town was largely destroyed by lava by early June, and the bay filled in as the lava flow extended out into the ocean.

On January 12, 1960 residents of Kapoho experienced over 1,000 small earthquakes shaking the area. Deep cracks opened up in the street, and there are historic photos of residents inspecting the damage.

The eruption began on the night of the 13th, spilling lava out in the middle of a sugar cane field just above Kapoho. Although the main flow of lava flowed into the ocean, a slow-moving offshoot crept towards the town of Kapoho. Despite frantic efforts to divert the flow with earthen barricades or to harden it by spraying water on it, on January 28 the flow entered and buried the town. Nearly 100 homes and businesses as well as a hot spring resort were destroyed. The Cape Kumukahi Light east of the town was spared and continues in operation, but the keeper's dwellings were destroyed.

There has been no lava activity in Kapoho now for over 50 years. While the original town is gone, the name Kapoho remains associated with the area. Today, the natural tide pools, black sand beach, and warm hot springs help make Kapoho an attractive spot to live and for tourists to visit. Owing to these two factors, Kapoho is the most expensive area to live in Puna, with many homes costing over $1,000,000.

There are many snorkeling possibilities at the interconnected tidal pools of Kapoho.

All content from Kiddle encyclopedia articles (including the article images and facts) can be freely used under Attribution-ShareAlike license, unless stated otherwise. Cite this article:
Kapoho, Hawaii Facts for Kids. Kiddle Encyclopedia.