Kids Encyclopedia Facts
Not to be confused with Dragon. 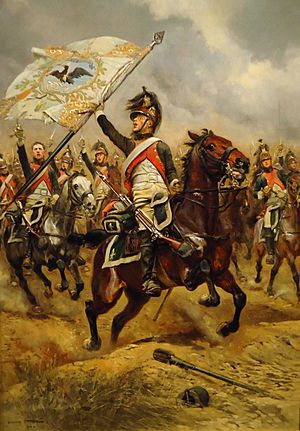 Dragoons were originally a type of mounted infantry. They used horses to move around, but got off the horses to fight on foot. They were also used as cavalry and were trained to fight with swords on horseback. The name is taken from a type of firearm, called a "dragon". The dragon was a handgun version of a blunderbuss. It was carried by dragoons of the French Army. In the late 17th and early 18th centuries, most European armies had dragoons. In modern times, some armoured or ceremonial mounted regiments still call themselves dragoons.

All content from Kiddle encyclopedia articles (including the article images and facts) can be freely used under Attribution-ShareAlike license, unless stated otherwise. Cite this article:
Dragoon Facts for Kids. Kiddle Encyclopedia.