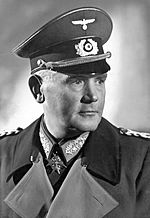 Werner Eduard Fritz von Blomberg (2 September 1878 in Stargard - 14 March 1946 in Nuremberg) was a German leader of the military until 1938. He was also a member of Hitler's Cabinet.

He got in the First World War the Iron Cross.

All content from Kiddle encyclopedia articles (including the article images and facts) can be freely used under Attribution-ShareAlike license, unless stated otherwise. Cite this article:
Werner von Blomberg Facts for Kids. Kiddle Encyclopedia.