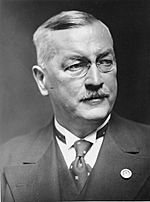 Franz Gürtner (26 August 1881 in Regensburg - 29 January 1941 in Berlin) was a German jurist and politician. Between 1932 and 1941 he was the minister of justice of the Third Reich. In this time he was also a member of Adolf Hitler's Cabinet.

In the First World War, he got the Iron Cross.

All content from Kiddle encyclopedia articles (including the article images and facts) can be freely used under Attribution-ShareAlike license, unless stated otherwise. Cite this article:
Franz Gürtner Facts for Kids. Kiddle Encyclopedia.