Porrentruy (German: Pruntrut) is a Swiss municipality and seat of the district of the same name found in the canton of Jura.

Porrentruy is the site of many important institutions of the canton of Jura, including the cantonal courts, and also of the archives of the former Episcopal See of Basel. It is also the location of the Université Populaire Jurassienne.

In 1988, Porrentruy was awarded the Wakker Prize for the development and preservation of its architectural heritage. 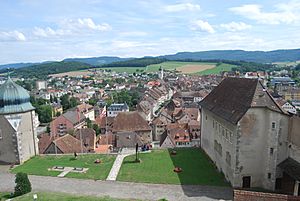 Of the built up area, industrial buildings made up 1.7% of the total area while housing and buildings made up 10.7% and transportation infrastructure made up 7.3%. Power and water infrastructure as well as other special developed areas made up 3.5% of the area while parks, green belts and sports fields made up 1.5%. Out of the forested land, 38.8% of the total land area is heavily forested and 1.2% is covered with orchards or small clusters of trees. Of the agricultural land, 22.0% is used for growing crops and 12.1% is pastures. Of the water in the municipality, 0.2% is in lakes and 0.6% is in rivers and streams.

All content from Kiddle encyclopedia articles (including the article images and facts) can be freely used under Attribution-ShareAlike license, unless stated otherwise. Cite this article:
Porrentruy Facts for Kids. Kiddle Encyclopedia.