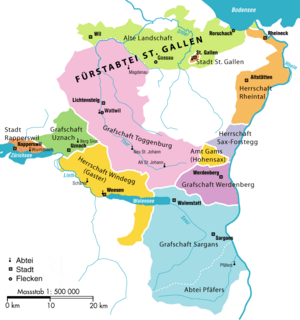 The canton of St. Gallen is an artificial construct of various historical territories, defined by Napoleon Bonaparte in the Act of Mediation in 1803. About half of the canton's area corresponds to the acquisitions of the abbey of St. Gallen over centuries.

The city of St. Gallen became independent of the abbey in 1405. At the same time, the abbey lost control of Appenzell. Conversely, the Toggenburg was acquired by the Abbey in 1468.

Both the city and the abbey were associates (Zugewandte Orte) of the Old Swiss Confederacy, but unlike Appenzell never joined as full members.

In April 1798, the territories of the later canton of St. Gallen were divided between the cantons of Säntis and Linth of the Helvetic Republic (along with Appenzell, Glarus and parts of Schwyz.

However, the two new Cantons had immediate financial problems and were forced to institute a number of unpopular taxes and laws. The Abbey was secularized on 17 September 1798 and the Prince-Abbot Pankraz Vorster fled to Vienna. The unpopular laws and the closing of the Abbey caused unrest throughout the area. When the War of the Second Coalition broke out in 1799, an Austrian army marched into eastern Switzerland and returned the Prince-Abbot to his throne at the Abbey. However, his victory was short lived. The Austrian and Russian armies were defeated outside Zürich and the French Army returned to St. Gallen driving the Prince-Abbot out.

In 1803, as part of the Act of Mediation, the area joined the Swiss Confederation as the Canton of St. Gallen.

The cantonal constitution of 1803 was revised in 1814. Because of the confessional heterogeneity of the canton's population, the 1814 constitution did unusually organise matters of religion, marriage and education not on a cantonal level but introduced a twofold division (confessional dualism), with separate Protestant and a Catholic assemblies subordinate to the legislative cantonal assembly (Grosser Rat).

The constitution was revised again in 1831, introducing elements of direct democracy. The constitution of 1831 divided the canton into 15 districts (Bezirke), reduced to 14 in 1918 (fusion of Tablat district with St. Gallen district).

Due to continuing confessional squabbles over the organisation of schools, the canton eventually placed education under its authority in 1861.

The constitution was yet again revised in 1890, with a stronger emphasis on direct democracy.

The 1890 constitution remained in effect, with numerous later changes, until 2001, the date of the latest revision of the cantonal constitution.

In the 2001 constitution, the division into districts was replaced by a division into eight constituencies (Wahlkreise), effective on 1 January 2003. 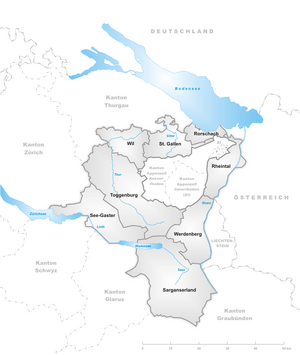 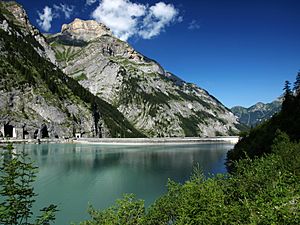 The canton is located in the north east of Switzerland. It is bounded to the north by Lake Constance (Bodensee). To the east lies the Rhine valley. Over the Rhine are Austria (state of Vorarlberg) and Liechtenstein. To the south, the canton of St. Gallen is bounded by the cantons of Graubünden, Glarus and Schwyz. To the west lie the cantons of Zürich and Thurgau.

The two half cantons Appenzell Innerrhoden and Appenzell Ausserrhoden are completely surrounded by lands of the canton of St. Gallen.

The mountains of the canton include part of a thrust fault that was declared a geologic UNESCO world heritage site, under the name Swiss Tectonic Arena Sardona, in 2008.

Agricultural activity consists predominantly of dairy farming and cattle breeding in the mountainous areas. In the plains fruit and wine production are important, but there is also mixed farming.

Industries of the canton include optical goods, pyrotechnics, chemicals and pharmaceuticals. Tourism plays an important role in the many resorts. There is a thermal spa in Bad Ragaz and another in St. Margrethen and a great number of winter sports facilities.

All content from Kiddle encyclopedia articles (including the article images and facts) can be freely used under Attribution-ShareAlike license, unless stated otherwise. Cite this article:
Canton of St. Gallen Facts for Kids. Kiddle Encyclopedia.