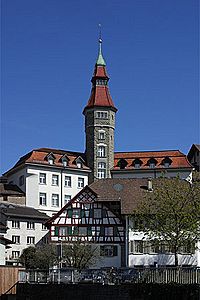 The city is first written about in 1246. It grew up around the Frauenfeld castle on the land of the Reichenau convent.

In 1264, it became the property of the Habsburgs. In 1374, the Habsburgs bestowed the right of judgment for all of Thurgau (which then included St. Gallen) on the Duke of Frauenfeld.

The fall of the old Old Swiss Confederacy in 1798 as a result of the French invasion brought an end to the gatherings in Frauenfeld. 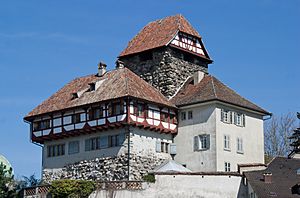 All content from Kiddle encyclopedia articles (including the article images and facts) can be freely used under Attribution-ShareAlike license, unless stated otherwise. Cite this article:
Frauenfeld Facts for Kids. Kiddle Encyclopedia.