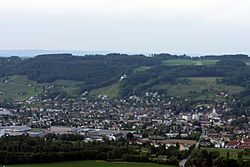 Weinfelden is a municipality in the canton of Thurgau in Switzerland. It is the capital of the district of the same name.

In December 2004 it had about 9500 people. Since it is in the middle of the canton, part of the canton's government is in the town. The Thurgau cantonal bank is also there. The grand council of the canton meets in Weinfelden during the winter.

Already in the year 124 AD, there was a Roman bridge over the Thur at Weinfelden. The name Weinfelden is first documented in 838.

Weinfelden was by far the biggest town in the canton of Thurgau. In 1798, Paul Reinhart and his committee led the area to freedom from the domination of the Eidgenossen. In 1803, Thurgau became an independent canton, through the mediation of Napoleon, with Frauenfeld as capital.

In 1830, Thomas Bornhauser spoke to a large crowd in Weinfelden, demanding a liberal constitution for the canton. It is one of the first (if not the first) such document.

Portraits of both Paul Reinhart and Thomas Bornhauser hang in the Rathaus.

All content from Kiddle encyclopedia articles (including the article images and facts) can be freely used under Attribution-ShareAlike license, unless stated otherwise. Cite this article:
Weinfelden Facts for Kids. Kiddle Encyclopedia.