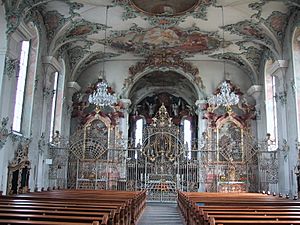 The name of the municipality stems from the Augustinian monastery Crucelin, later Kreuzlingen Abbey. It was founded in 1125 by the Bishop of Constance Ulrich I. In the Swabian War and the 30 Years' War after the siege of Constance by Swedish troops, the Augustinian monastery was burned down by the people of Constance, who blamed the monks for having supported the enemy. In 1650, the monastery was rebuilt in its present location. In 1848, the buildings became a teachers' school. The chapel became a Catholic church. 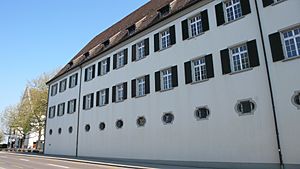 People already lived in the Kreuzlingen area during the Bronze Age. Celtic and Roman coins and artifacts show that people continued to be settled in the area pre-writing.

Until the beginning of the 19th century, the current centre of Kreuzlingen was still largely agricultural. The first steamboats began to operate on Lake Constance in 1824. The first train line to Romanshorn was finished in 1871, and the second to Etzwilen in 1875. 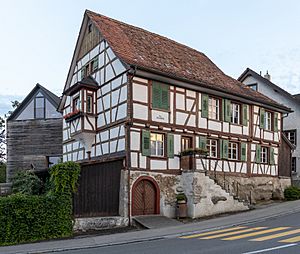 This brought commerce and industry to the area. In 1874, Kreuzlingen became the capital of the district, instead of the previous capital, Gottlieben. However, until World War I, Kreuzlingen was a kind of suburb of Constance. Most of its profits went to German firms. The war made Kreuzlingen more independent.

Part of the former Sanatorium

The Sanatorium of Bellevue (1857–1980), which occupied part of the old monastery, played an important role in the history of Kreuzlingen. In 1842, Ignaz Vanotti from Constance bought a large area of land and built a residential and commercial building in 1843. In 1857, Ludwig Binswanger, a psychiatrist from Münsterlingen acquired the property and opened a private sanatorium. The clinic was very modern and remained in the control of the Binswanger family for nearly 120 years. Important psychiatric advances were made at the sanatorium. However, few of its buildings remain. 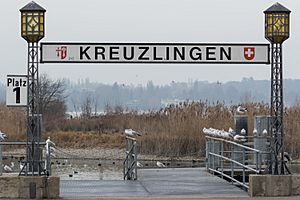 Earlier, most of the people in Kreuzlingen made a living in the wine industry. However, because of diseases and bad harvests, the last wine grapes were raised in Kreuzlingen in 1938.

Today, the local economy is mostly shopping and handcraft, with the largest employer being a clothing maker.

All content from Kiddle encyclopedia articles (including the article images and facts) can be freely used under Attribution-ShareAlike license, unless stated otherwise. Cite this article:
Kreuzlingen Facts for Kids. Kiddle Encyclopedia.