Baden (German for "Baths"), sometimes unofficially, to distinguish it from other Badens, called Baden bei Zürich ("Baden near Zürich") or Baden im Aargau ("Baden in Aargau"), is a municipality in Switzerland. It is the seat of the district of Baden in the canton of Aargau. Located 25 km (16 mi) northwest of Zürich in the Limmat Valley (Limmattal) mainly on the western side of the Limmat, its mineral hot springs have been famed since at least the Roman era. Its official language is (the Swiss variety of Standard) German, but the main spoken language is the local Alemannic Swiss German dialect. Its population in 2010 was over 18,000.

Downtown Baden is located on the left bank of the river Limmat in its eponymous valley. Its area is divided into the Kappelerhof, Allmend, Meierhof, and Chrüzliberg. In 1962, Baden also absorbed the adjacent village of Dättwil. On the right bank of the river is the village of Ennetbaden, formerly "Little Baden" (Kleine Bäder). These communities, as of 2006[update], had an area of 13.2 km2 (5.1 sq mi). Of that, 9.9% is used for agricultural purposes, while 56.9% is forested and 31.6% is used for buildings or roads. The remainder (1.6%) is non-productive (rivers or lakes).

A Latin inscription from Aquae Helveticae

Baden is first attested in Roman sources as Aquae Helveticae ("Waters of the Helvetii"). Hippocrates had counseled against the use of water from mineral springs, but by the time of Vitruvius, Pliny, and Galen they were being selectively employed for certain ailments. In addition to their medical use, the Romans also revered natural springs for recreational and religious use. Tacitus mentions the town obliquely, describing it as "a place built up into a semblance of a town... much used for its healthful waters". This Roman vicus was to the north of the Baden gorge on the Haselfeld, founded to support the legionary camp at Vindonissa. There was a pool complex on the left bank of the Limmat fed by a system of springs with 47 °C (117 °F) water. The main axis of the vicus was the Vindonissa road, which ran parallel to the slope. It was flanked by porticos, beyond which lay commercial and residential buildings. The center of the settlement had some wealthy villa-like structures. The resort, residential, and commercial districts all grew to a respectable size over the first half of the 1st century. In AD 69, however, the 21st Legion burned the town amid the conflicts of the Year of the Four Emperors. Its wooden buildings destroyed, the town was rebuilt in stone. The town shrank some after the closing of the Vinonissa camp in AD 101 but survived on trade. Reginus's pottery workshop and Gemellianus's bronze works flourished during the second half of the 2nd century. Around the middle of the 3rd century, however, the settlement was threatened by multiple Alemanni invasions and the Huns. The pools were fortified and a large number of coins stamped with references to the hot springs show it continued to be settled and frequented into late antiquity, but expansion of the settlement of Haselfeld came to an end. 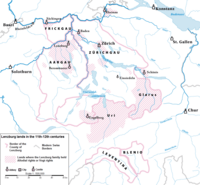 The growth of Habsburg domains from 1282

The baths were frequented again by the time of Charlemagne. A medieval necropolis in Kappelerhof has been dated as far back as the 7th century and a local lord fortifying the Stein by the 10th. The modern name Baden is first attested in 1040. Around that time, its land was held by the Lenzburgs, some of whom styled themselves as the Counts of Baden and erected a castle. Upon their extinction around 1172, their domains were divided among the Hohenstaufens, Zähringens, and Kyburgs, with the Kyburgs gaining control of Baden through the marriage of Harmanns III with its heiress Richenza. Around 1230, they founded the medieval city of Baden, holding markets and erecting a bridge across the river in 1242. Upon the death of the childless Hartman IV in 1264, his lands were seized by Rudolf von Habsburg by right of his wife Gertrude's claim. Stein Castle was held by Habsburg bailiffs and maintained the administration and archives for their surrounding territory. The Confederation besieged and destroyed the castle and its records in 1415 during its conquest of Aargau. 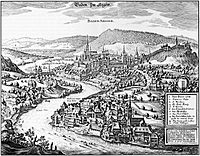 Under the Confederation, their bailiff held a castle on the right bank of the Limmat, controlling access to the bridge. The Swiss Diet met at Baden repeatedly from 1426 to about 1712, making Baden a kind of capital for Switzerland. The Town Hall (Rathaus) where it met is beautifully carved and can still be visited. Over the course of the 15th century, the town regained its popularity as a "Cure Resort" (Kur-Ort). The town was the site of a famous debate on transubstantiation from May 21 to June 18, 1526. Although Zwingli refused to attend in person, he printed broadsheets throughout its duration and sent his assistant Johann Oecolampadius to debate Johann Eck and Thomas Murner. In the end, a majority decided against the reformers but a substantial bloc emerged on their behalf as well. Johann Pistorius held a disputation in the city in 1589. Stein was refortified sometime between 1658 and 1670 but the fortress was abandoned in 1712. In 1714, the treaties of Rastatt and Baden ended hostilities between France and the Habsburgs, the last theater of the War of the Spanish Succession. Another Treaty of Baden ended the Toggenburg War among the Protestant and Catholic Swiss cantons in 1718. Baden was the capital of the canton of Baden from 1798 until 1803, when the canton of Aargau was created.

In the 19th century, the waters were considered efficacious for gout and rheumatism. They were frequented by Goethe, Nietzsche, Thomas Mann, and particularly often by Hermann Hesse, who visited the town annually over almost thirty years.

Modern excavations have discovered three of the Roman's bathing pools. The municipalities of Baden and Neuenhof were considering a merger on 1 January 2012 into a new municipality which would have be known as Baden. This has been refused by a popular vote in Baden on 13 June 2010. 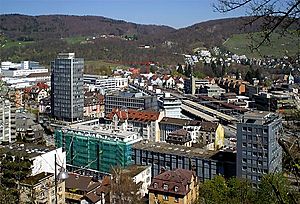 Baden with the railway station

In the 19th and 20th century Baden became an industrial town, main seat of the former Brown Boveri Company. Most industrial facilities have moved, but Baden is still the seat of many of the engineering services of ABB and the power service arm of Alstom. The former industrial quarter to the north of the city is now being redeveloped into offices, shopping and leisure facilities.

There is also a Casino in Baden.

The blazon of the municipal coat of arms is Argent a Pale Sable and a chief Gules.

The old town, the Tagsatzung room in the city hall, the 1847 railway station and the building of the Stiftung Langmatt are listed as heritage sites of national significance.

In addition to the Roman city, the ruins of castle Stein and the other sites listed above, Baden is home to a number of other Swiss Heritage Sites. The industrial sites include the ABB Schweiz archive along with the former offices of Brown Boveri Company as well as the regional former utilities plant on Haselstrasse 15. There are three designated religious buildings in Baden; the Catholic city church and Sebastians chapel, the Swiss Reformed parish church and the Synagogue on Parkstrasse 17. Perhaps included in the last two groups is the Crematorium and memorial hall on Zürcherstrasse 108. The wooden bridge between Untere Halde and Wettingerstrasse is also included in the list. A number of individual buildings are also included in the inventory. These include; Bernerhaus at Weite Gasse 13, Haus Zum Schwert on Schwertstrasse or Oelrainstrasse 29, the Hotel Verenahof, the Hotel Zum wilden Mann, the spa-theater with a glass foyer at Parkstrasse 20, the Restaurant Paradies on Cordulaplatz, Villa Boveri (since 1943 Clubhaus BBC/ABB) and the Villa Langmatt (now an art museum) at Römerstrasse 30.

The village of Baden is designated as part of the Inventory of Swiss Heritage Sites.

Baden is also famous for the traditional delicacy Spanisch Brötli, which is being made once again after a lapse of some years.

All content from Kiddle encyclopedia articles (including the article images and facts) can be freely used under Attribution-ShareAlike license, unless stated otherwise. Cite this article:
Baden, Switzerland Facts for Kids. Kiddle Encyclopedia.