Ferdinand I (Spanish: Fernando I) (10 March 1503 – 25 July 1564) was Holy Roman Emperor from 1558, king of Bohemia and Hungary from 1526, and king of Croatia from 1527 until his death in 1564. Before his accession, he ruled the Austrian hereditary lands of the Habsburgs in the name of his elder brother, Charles V, Holy Roman Emperor. Also, he often served as Charles' representative in Germany and developed encouraging relationships with German princes.

The key events during his reign were the contest with the Ottoman Empire, which in the 1520s began a great advance into Central Europe, and the Protestant Reformation, which resulted in several wars of religion. Ferdinand was able to defend his realm and make it somewhat more cohesive, but he could not conquer the major part of Hungary. His flexible approach to Imperial problems, mainly religious, finally brought more result than the more confrontational attitude of his brother. 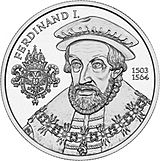 Ferdinand I has been the main motif for many collector coins and medals, the most recent one is the Austrian silver 20-euro Renaissance coin issued on 12 June 2002. A portrait of Ferdinand I is shown in the reverse of the coin, while in the obverse a view of the Swiss Gate of the Hofburg Palace can be seen.

All content from Kiddle encyclopedia articles (including the article images and facts) can be freely used under Attribution-ShareAlike license, unless stated otherwise. Cite this article:
Ferdinand I, Holy Roman Emperor Facts for Kids. Kiddle Encyclopedia.