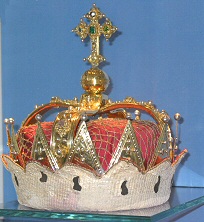 Crown of the Archduke of Austria.

The title of Archduke (feminine: Archduchess) (German: Erzherzog, feminine form: Erzherzogin) is a rank above Duke and under King. It is very rare. It was used only by males of the House of Habsburg.

The English word is recorded only since 1530, derived from Middle Latin archidux, from arch(i)- (primary or chief) + dux 'duke' .

Archduke (Erzherzog) is a title distinct from Grand Duke (Großherzog or Großfürst) that is used in some other German royal houses and still in sovereign Luxemburg.

All content from Kiddle encyclopedia articles (including the article images and facts) can be freely used under Attribution-ShareAlike license, unless stated otherwise. Cite this article:
Archduke Facts for Kids. Kiddle Encyclopedia.