Politics of Scotland facts for kids

Scotland is a country which is part of the United Kingdom (UK). The UK is de jure a unitary state, and the Parliament of the United Kingdom, located at Westminster, London, is sovereign over the whole state. However, since the late 1990s, a system of devolution has emerged in the UK, under which Scotland, Wales and Northern Ireland have each been granted some measure of self-government within the UK.

Scotland entered into a political union with England in 1707, and since then has sent representatives to the Palace of Westminster, which became the British parliament. Currently, 59 Members of Parliament (MPs) represent Scottish constituencies at Westminster, and issues such as the constitution, foreign affairs, defence, social security, pensions, issues of medical ethics, and fiscal, economic and monetary policy are decided at UK-wide level. In 1999, an 129-member Scottish Parliament was established in Edinburgh; it has full power to make law in Scotland, except in reserved matters. In the UK government, Scottish affairs are represented by the Secretary of State for Scotland, currently David Mundell MP. The Scottish Government is headed by a First Minister, who is the leader of the political party with the most support in the Scottish Parliament, currently Nicola Sturgeon MSP. The head of state in Scotland is the British monarch, currently Queen Elizabeth II (since 1952). As the UK is part of the European Union, Scotland also elects six Members to sit in the European Parliament.

Today, the creation of an independent Scotland outside the United Kingdom remains a prominent issue. On 18 September 2014, the people of Scotland voted in a referendum on whether to become independent, and opted to stay in the Union.

The party with the largest number of seats in the Scottish Parliament is the Scottish National Party (SNP), which campaigns for Scottish independence. The current First Minister of Scotland is SNP leader Nicola Sturgeon, who has led a government since November 2014. The previous First Minister, Alex Salmond, led the SNP to an overall majority victory in the May 2011 general election, which was then lost in 2016 and now forms a minority government. Other parties represented in the parliament are the Labour Party, Conservative Party which form the official opposition, Liberal Democrats and the Scottish Green Party. The next Scottish Parliament election is due to be held in May 2021.

Under devolution Scotland is represented by 59 MPs in the House of Commons of the United Kingdom elected from territory-based Scottish constituencies, out of a total of 650 MPs in the House of Commons. A Secretary of State for Scotland, who prior to devolution headed the system of government in Scotland, sits in the Cabinet of the United Kingdom and is responsible for the limited number of powers the office retains since devolution, as well as relations with other Whitehall Ministers who have power over reserved matters. The Scottish Parliament can refer devolved matters back to Westminster to be considered as part of United Kingdom-wide legislation by passing a Legislative Consent Motion — usually referred to as a Sewel Motion. This has been done on a number of occasions where it has been seen as either more efficient, or more politically expedient to have the legislation considered by Westminster. The Scotland Office is a department of the United Kingdom government, responsible for reserved Scottish affairs. The current Secretary of State for Scotland is David Mundell MP, a Conservative. Until 1999, Scottish peers were entitled to sit in the House of Lords.

The main political debate in Scotland tends to revolve around attitudes to the constitutional question. Under the pressure of growing support for Scottish independence a policy of devolution had been advocated by all three GB-wide parties to some degree during their history (although Labour and the Conservatives have also at times opposed it). This question dominated the Scottish political scene in the latter half of the 20th century with Labour leader John Smith describing the revival of a Scottish parliament as the "settled will of the Scottish people". Now that devolution has occurred, the main argument about Scotland's constitutional status is over whether the Scottish Parliament should accrue additional powers (for example over fiscal policy), or seek to obtain full independence. Ultimately the long term question is: should the Scottish parliament continue to be a subsidiary assembly created and potentially abolished by the constitutionally dominant and sovereign parliament of the United Kingdom (as in devolution) or should it have an independent existence as of right, with full sovereign powers (either through independence, a federal United Kingdom or a confederal arrangement)? To clarify these issues, the SNP-led Scottish Executive published Choosing Scotland's Future, a consultation document directed to the electorate under the National Conversation exercise.

The programmes of legislation enacted by the Scottish Parliament have seen the divergence in the provision of public services compared to the rest of the United Kingdom. While the costs of a university education, and care services for the elderly are free at point of use in Scotland, fees are paid in the rest of the UK. Scotland was the first country in the UK to ban smoking in public places.

The election of the Labour government in 1997 was followed by a referendum in Scotland on establishing a devolved Scottish Parliament. 74.3% of voters agreed with the establishment of the parliament and 63.5% agreed it should have tax-varying powers, which meant that it could adjust income taxes by up to 3%.

The Parliament was then created by the Scotland Act 1998 of the Parliament of the United Kingdom (Westminster Parliament). This Act sets out the subjects still dealt with at Westminster, referred to as reserved matters, including Defence, International Relations, Fiscal and Economic Policy, Drugs Law and Broadcasting. Anything not mentioned as a specific reserved matter is automatically devolved to Scotland, including health, education, local government, Scots law and all other issues. This is one of the key differences between the successful Scotland Act 1998 and the failed Scotland Act 1978.

The proportional representation system has resulted in the election of a number of candidates from parties that would not have been expected to get representation through the first past the post system.

A devolved government called the Scottish Executive (renamed Scottish Government in 2007) was established along with the Scottish Parliament in 1999, with the First Minister of Scotland at its head. The secretariat of the Executive is part of the UK Civil Service and the head of the Executive, the Permanent Secretary (presently Sir Peter Housden), is the equivalent of the Permanent Secretary of a Whitehall department.

Scotland in the Parliament of the United Kingdom

The House of Commons 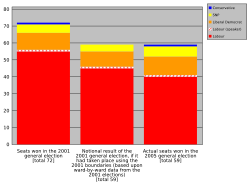 Until the 2005 general election, Scotland elected 72 MPs from 72 single-member constituencies to serve in the House of Commons. As this over-represented Scotland in comparison to the other parts of the UK, Clause 81 of the Scotland Act 1998 equalised the English and Scottish electoral quota. As a result, the Boundary Commission for Scotland's recommendations were adopted, reducing Scottish representation in the House of Commons to 59 MPs with effect from the 2005 general election. The necessary amendment to the Scotland Act 1998, was passed by the Parliament of the United Kingdom as the Scottish Parliament (Constituencies) Act 2004. The previous over-representation was widely accepted before to allow for a greater Scottish voice in the Commons, but since the establishment of a Scottish Parliament it has been felt that this is not necessary.

Scottish MPs are elected at the same time as the rest of the UK's MPs.

Scotland was historically represented in the UK government by the Secretary of State for Scotland. This post was established in the 1880s but recently it has been the topic of much speculation. Many believe that since devolution there is no need for such a role. The Secretary of State's department, the Scotland Office, created in 1999, liaises with other Whitehall departments about devolution matters.

Current Scottish representation in the Commons is :

The House of Lords

It is also represented in the Committee of the Regions. 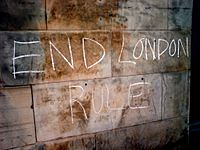 Until 1832 Scottish politics remained very much in the control of landowners in the country, and of small cliques of merchants in the burghs. Agitation against this position through the Friends of the People Society in the 1790s met with Lord Braxfield's explicit repression on behalf of the landed interests. The Scottish Reform Act 1832 rearranged the constituencies and increased the electorate from under 5,000 to 65,000. The Representation of the People (Scotland) Act 1868 extended the electorate to 232,000 but with "residential qualifications peculiar to Scotland". However, by 1885 around 50% of the male population had the vote, the secret ballot had become established, and the modern political era had started.

From 1885 to 1918 the Liberal Party almost totally dominated Scottish politics. Only in the general election of 1955 did the Unionist Party, together with their National Liberal and Liberal Unionist allies, win a majority of votes.

In general, the Unionists achieved their best results in the Glasgow area, due to the Orange vote.

After the coupon election of 1918, 1922 saw the emergence of the Labour Party as a major force. Red Clydeside elected a number of Labour MPs. A communist was elected for Motherwell in 1924, but in essence the 1920s saw a 3-way fight between Labour, the Liberals and the Unionists. The National Party of Scotland first contested a seat in 1929. It merged with the centre-right Scottish Party in 1934 to form the Scottish National Party, but the SNP remained a peripheral force until the watershed Hamilton by-election of 1967.

The National Government won the vast majority of Scottish seats in 1931 and 1935: the Liberal Party, banished to the Highlands and Islands, no longer functioned as a significant force in central Scotland.

In 1945, the SNP saw its first MP (Robert McIntyre) elected at the Motherwell by-election, but had little success during the following decade. The ILP members rejoined the Labour Party, and Scotland now had in effect a two-party system.

In the course of the twentieth century, the Labour Party rose to prominence as Scotland's main political force. The party was established to represent the interests of workers and trade unionists. From 1999 to 2007, they operated as the senior partners in a coalition Scottish Executive. They lost power in 2007 when the SNP won a plurality of seats and have since entered a period of decline, losing all but one of their seats in the 2015 UK election and falling to third place in the 2016 Scottish election.

The Scottish Liberal Democrats were the junior partners in the 1999 to 2007 coalition Scottish Executive. The party has lost much of its electoral presence in Scotland since the UK Liberal Democrats entered into a coalition government with the UK Conservative Party in 2010. In the 2015 UK election they were reduced from 12 seats to one seat, and since the 2016 Scottish Parliament election they have had the fifth highest number of MSPs (five, unchanged on 2011.

The Scottish Green Party have won regional additional member seats in every Scottish Parliament election, as a result of the proportional representation electoral system. They won one MSP in 1999, increased their total to seven at the 2003 election but saw this drop back to 2 at the 2007 election. They retained two seats at the 2011 election, then increased this total to six in the 2016 election. The Greens support Scottish independence.

The Scottish Socialist Party (SSP) were formed in 1998 to operate as a political party that could unite the majority of the left-wing in Scotland. They won one MSP in 1999 and increased their total to six at the 2003 election. The SSP split in 2006 when two MSPs and a large number of activists left to form Solidarity. Both parties lost all their seats at the 2007 election, but the SSP continues to have local representation. Both the SSP and Solidarity support Scottish independence.

All content from Kiddle encyclopedia articles (including the article images and facts) can be freely used under Attribution-ShareAlike license, unless stated otherwise. Cite this article:
Politics of Scotland Facts for Kids. Kiddle Encyclopedia.