Budd Inlet was named by Charles Wilkes during the United States Exploring Expedition, to honor Thomas A. Budd, who served as acting master of the Peacock and Vincennes. A portion of the coast of Antarctica, Budd Coast, is also named for Thomas Budd. 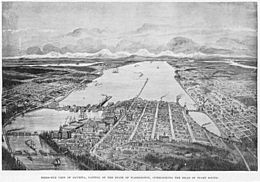 Historically, the shores surrounding Budd Inlet were occupied by village sites of the Steh-Chass (or Stehchass), Lushootseed-speaking peoples who became part of the post-treaty Squaxin Island Tribe.

Around 1850, American settlers founded the city of Olympia at the southern end of Budd Inlet.

Budd Inlet is 6.84 mi (11.01 km) long and has a maximum breadth of 1.86 mi (2.99 km). The southern end of Budd Inlet is divided into two channels - West Bay and East Bay - by a peninsula that was artificially broadened throughout the late 19th and early 20th century.

The Deschutes River empties into West Bay just north of Tumwater Falls. The mudflats that existed here were dammed and submerged beneath Capitol Lake in 1949.

A deepwater shipping channel was dredged in East Bay to provide deep water access to the Port of Olympia.

All content from Kiddle encyclopedia articles (including the article images and facts) can be freely used under Attribution-ShareAlike license, unless stated otherwise. Cite this article:
Budd Inlet Facts for Kids. Kiddle Encyclopedia.