Because of their strong cultural connection with the water, they are also known as the People of the Water. The modern tribe is named after the Squawksin of Case Inlet - meaning “in between” or “piece of land to cross over to another bay” in the Lushootseed language; the name was changed to Squaxin Island.

The Squaxin Island people speak the Lushootseed language. They moved onto their reservation in modern-day Mason County, Washington, in 1855. The Squaxin Island Tribe was one of the first Native American tribes in the U.S. to enter into the Self Governance Demonstration Project with the federal government.

Little Creek Casino Resort at Kamilche is owned and operated by the Squaxin Island Tribe. LCCR is a Northwest Native American themed Resort. 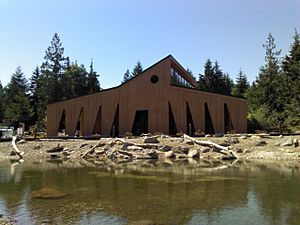 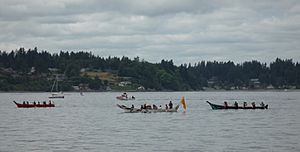 Canoes arriving in Olympia during the paddle to Squaxin 2012 event.

An estimated 40,000 people attended or visited the "Paddle to Squaxin Island" journey, hosted by the Squaxin Museum and The Evergreen State College, and funded by a National Endowment for the Arts "Our Town" grant. Protocol and Dining were held in an old baseball field. The quiet community was loud for a whole week. Months before the event, major construction was done. Many parking lots were made, a campground was built and a Reflecting Pond was put in the Tribal Government Campus.

Tribes from around the country and world attended the event, such as New Zealand, Canada, Alaska, etc.

All content from Kiddle encyclopedia articles (including the article images and facts) can be freely used under Attribution-ShareAlike license, unless stated otherwise. Cite this article:
Squaxin Island Tribe Facts for Kids. Kiddle Encyclopedia.