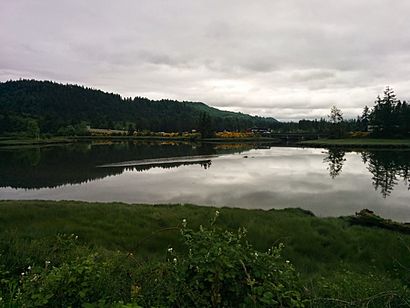 High tide on Mud Bay in the spring

Mud Bay is the southernmost reach of Puget Sound, at Eld Inlet just outside the city limits of Olympia, Washington. The name Eld Inlet was officially bestowed after a member of the U.S. Navy's Wilkes Expedition, but "Mud Bay" is a local, informal adoption.

The Mud Bay Logging Company ran a railroad to the bay where they had a log dump.

A roadside attraction was placed at the bay near U.S. Highway 101 in 2002: a set of larger-than-life metal sculptures of cows and a bull created by Western Washington sculptor Gary Vig. The bull is 22 feet (6.7 m) long and weighs 3 tons.

An interpretive sign about the landing of Peter Puget at Mud Bay was placed by the county's historical commission along Mud Bay Road. The William Cannon Footpath (or Trail) is a 4,000-foot (1,200 m) long public-access trail built in 2002 along the bayshore in the vicinity of the log dump, in partnership with Ralph Munro, McLane Elementary School, Capital High School, NOAA, and others.

The Blue Heron Bakery was a local landmark whole-grain bakery on the edge of the bay from 1978 until 2015 when it moved about a mile east into Olympia.

The Mud Bay Run is a traditional annual, 500-meter clothing-optional race across the mud flats at low tide. It is held on the day of, and just before, The Evergreen State College's graduation procession.

All content from Kiddle encyclopedia articles (including the article images and facts) can be freely used under Attribution-ShareAlike license, unless stated otherwise. Cite this article:
Mud Bay, Thurston County, Washington Facts for Kids. Kiddle Encyclopedia.