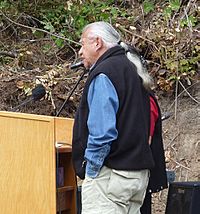 Billy Frank, Jr. (March 9, 1931 – May 5, 2014) was a Native American environmental leader and treaty rights activist. Frank is known for his grassroots campaign for fishing rights on the tribe’s Nisqually River in Washington. He was mostly active during the 1960s and 1970s. He helped keep natural resources in the state. He was born in Nisqually, Washington.

All content from Kiddle encyclopedia articles (including the article images and facts) can be freely used under Attribution-ShareAlike license, unless stated otherwise. Cite this article:
Billy Frank, Jr. Facts for Kids. Kiddle Encyclopedia.