Kids Encyclopedia Facts
This page is about the group of peaks in the Sierra Nevada. For the mountain range in the northern San Francisco Bay Area, see The Palisades (Napa County). For other uses, see Palisades (disambiguation). 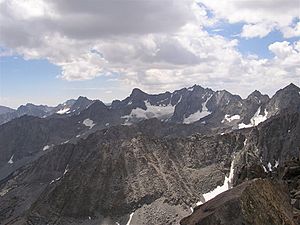 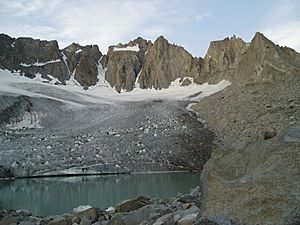 North Palisade and Thunderbolt Peak, from the Palisade Glacier

The Palisades (or the Palisade Group) are a group of peaks in the central part of the Sierra Nevada in the U.S. state of California. They are located about 12 miles (19 km) southwest of the town of Big Pine, California. The peaks in the group are particularly steep, rugged peaks and "contain the finest alpine climbing in California." The group makes up about 6 miles (10 km) of the Sierra Crest, which divides the Central Valley watershed from the Owens Valley, and which runs generally northwest to southeast.

"At the head of the north fork, along the main crest of the Sierra, is a range of peaks, from 13,500 to 14,000 feet high, which we called 'the Palisades.' These were unlike the rest of the crest in outline and color, and were doubtless volcanic; they were very grand and fantastic in shape."

Notable peaks of the group include four independent fourteeners:

and the following mountains in addition:

All content from Kiddle encyclopedia articles (including the article images and facts) can be freely used under Attribution-ShareAlike license, unless stated otherwise. Cite this article:
Palisades (California Sierra) Facts for Kids. Kiddle Encyclopedia.