Independence is a census-designated place in Inyo County, California. Independence is located 41 miles (66 km) south-southeast of Bishop, at an elevation of 3930 feet (1198 m). It is the county seat of Inyo County, California. The population of this census-designated place was 669 at the 2010 census, up from 574 at the 2000 census. 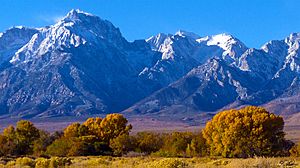 Mount Williamson (14,375 feet or 4,382 metres), one of the spectacular peaks of the John Muir Wilderness, from near the Independence Airport

The tiny village of Independence is bisected by U.S. Route 395, the main north-south highway through the Owens Valley.

The Sierra Nevada mountains to the west lie within the John Muir Wilderness Area. Onion Valley, one of the principal entry routes to the John Muir Wilderness, is accessed via the Onion Valley road which heads directly west out of Independence. This trail takes hikers to Kings Canyon/Sequoia National Parks which protect the Sierra Nevada west of the divide between the Owens Valley on the east and the rivers which drain into the San Joaquin Valley to the west. 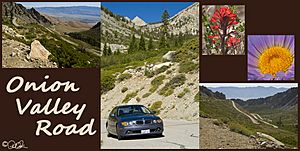 Independence is a popular resupply location for hikers trekking the 2,650 mile long Pacific Crest Trail which extends from the Mexican border to Canada along the crest of the Sierra Nevada and Cascade Ranges. The highest pass along the entire trail, 13,153 foot (4009 m) Forester Pass, is directly west of Independence. 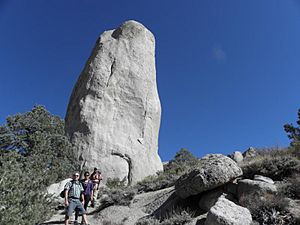 This granite monolith, The Winnedumah-Paiute Monument, rises prominently from the crest of the Inyo Mountains east of Independence.

According to the United States Census Bureau, Independence covers an area of 4.9 square miles (13 km2), over 99% of it land. 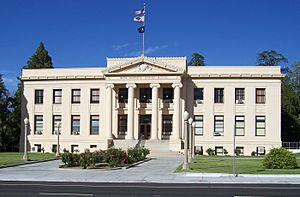 Charles Putnam founded a trading post at the site in 1861. It became known as Putnam's, and later Little Pine from the Little Pine Creek.

Independence began as the US Army Camp Independence (two miles north of the current town) established by Lieutenant Colonel George S. Evans on July 4, 1862. Col. Evans established the camp at the request of local settlers who feared Indian hostilities. The camp was soon closed, but was re-established as Fort Independence when hostilities resumed in 1865. The fort was finally abandoned in 1877, and it is currently a reservation for the Fort Independence Indian Community of Paiute Indians.

Independence became the seat of Inyo County in 1866 when its chief competitor for the honor, a mining camp called Kearsarge, disappeared under an avalanche.

The first post office at Independence was established in 1866.

The Eastern California Museum with extensive collections, exhibits, and programs; is located at 155 North Grant Street in Independence.

The home of author Mary Austin, the author of "The Land of Little Rain", is preserved as a museum located at 235 Market Street in Independence. 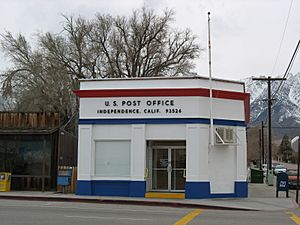 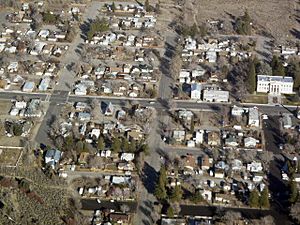 Independence from the air.

There were 272 households out of which 23.2% had children under the age of 18 living with them, 49.6% were married couples living together, 7.0% had a female householder with no husband present, and 40.8% were non-families. 35.7% of all households were made up of individuals and 18.0% had someone living alone who was 65 years of age or older. The average household size was 2.11 and the average family size was 2.72.

Independence Day is the biggest event of the year in Independence. Celebrations traditionally begin on the evening of July 3 with a concert at Dehy Park while the fire for the deep-pit BBQ is prepared. The Independence Day events include a 4k run/walk, breakfast at Dehy Park, a parade along Highway 395, an arts & crafts show at the courthouse, "olde tyme" kids games, pie & ice cream social and BBQ at Dehy Park, concluding with a fireworks display at the airport.

The annual December Fruitcake Festival, inaugurated in 2004, is another popular event that draws many visitors.

Independence was the film location for the film Trial and Error.

All content from Kiddle encyclopedia articles (including the article images and facts) can be freely used under Attribution-ShareAlike license, unless stated otherwise. Cite this article:
Independence, California Facts for Kids. Kiddle Encyclopedia.