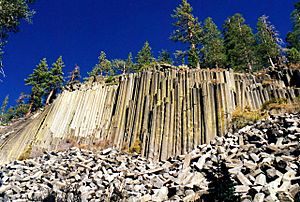 The longer fragments of basalt at the base of the cliff are much larger than a person. 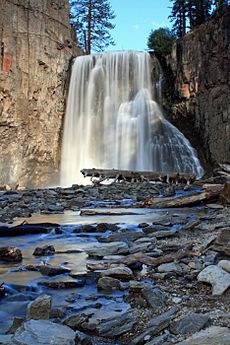 Devils Postpile National Monument is located near Mammoth Mountain in eastern California. The national monument protects Devil's Postpile, an unusual rock formation of columnar basalt. Devils Postpile National Monument encompasses 798 acres (323 ha) and includes two main tourist attractions: the Devil's Postpile formation and Rainbow Falls, a waterfall on the Middle Fork of the San Joaquin River. In addition, the John Muir Trail and Pacific Crest Trail merge into one trail as they pass through the monument. Excluding a small developed area containing the monument headquarters, visitor center and a campground; the National Monument lies within the borders of the Ansel Adams Wilderness.

It was created in 1911 as Devil Postpile National Monument, and has forever been widely referred to as Devil's Postpile National Monument; but it has been officially styled as plural without the apostrophe since the 1930s. The monument was once part of Yosemite National Park, but discovery of gold in 1905 near Mammoth Lakes prompted a boundary change that left the Postpile on adjacent public land. Later, a proposal to build a hydroelectric dam called for blasting the Postpile into the river. Influential Californians, including John Muir, persuaded the federal government to stop the demolition and, in 1911, President William Howard Taft protected the area as a National Monument.

The flora and fauna at Devils Postpile are typical of the Sierra Nevada. The monument contains animals and plants such as black bears, pine martens, mule deer, coyotes, quaking aspen, black cottonwood, alder, and willows, as well as many wildflowers, such as cinquefoil and alpine shooting star. Dark-eyed juncos and white-crowned sparrows are common in the summer. 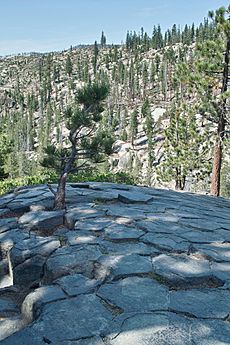 The tops of the postpile columns are accessible to visitors. The shapes of the columns are seen clearly here.

The name "Devil's Postpile" refers to a dark cliff of columnar basalt. Radiometric dating indicates the formation was created by a lava flow at some time less than 100,000 years ago. The source of the lava is thought to have been somewhere near Upper Soda Springs campground at the north end of Pumice Flat on the floor of the Middle Fork of the San Joaquin River, from where it flowed to the site of the Postpile. Estimates of the formations thickness range from 400 feet (120 m) to 600 feet (180 m). The lava that now makes up the Postpile was near the bottom of this mass.

Because of its great thickness, much of the mass of pooled lava cooled slowly and evenly, which is why the columns are so long and so symmetrical. Columnar jointing occurs when certain types of lava contract while cooling.

A glacier later removed much of this mass of rock and left a polished surface on top of the columns with very noticeable glacial striations and glacial polish.

The Postpile's columns average 2 feet (0.61 m) in diameter, the largest being 3.5 feet (1.1 m), and many are up to 60 feet (18 m) long. Together they look like tall posts stacked in a pile, hence the feature's name. If the lava had cooled perfectly evenly, all of the columns would be expected to be hexagonal, but some of the columns have different polygonal cross-sections due to variations in cooling. A survey of 400 of the Postpile's columns found that 44.5% were 6-sided, 37.5% 5-sided, 9.5% 4-sided, 8.0% 7-sided, and 0.5% 3-sided. Compared with other examples of columnar jointing, the Postpile has more hexagonal columns. Another feature that places the Postpile in a special category is the lack of horizontal jointing.

Several stones from the Devil's Postpile can be seen at the entrance to the United States Geological Survey headquarters lot in Reston, Virginia. 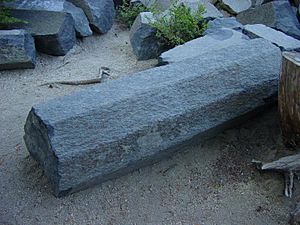 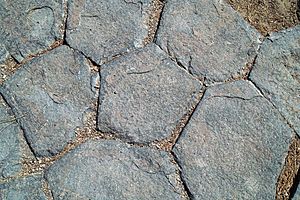 Tops of basalt columns – the most common shape is hexagonal, but other shapes are found, such as this pentagon.

Although the basaltic columns are impressive, they are not unique. Basalt columns are a common volcanic feature, and they occur on many scales (faster cooling produces smaller columns). Other notable sites include Svartifoss in Vatnajökull National Park in Iceland, Giant's Causeway in Northern Ireland, Fingal's Cave in Scotland, Titan's Piazza of the Mount Holyoke Range in Massachusetts, the Garni Gorge in Armenia, the Cyclopean Isles near Sicily, Sheepeater Cliff at Yellowstone National Park in Wyoming, Prismas Basálticos in Huasca de Ocampo, Mexico, the "Organ Pipes" formation on Mount Cargill in New Zealand, Gilbert Hill in Mumbai, Organ Pipes National Park in Australia and the "Column Cape" (Russian: Mis Stolbchaty) on Kunashir Island, the southernmost of the Kuril Islands. Columnar basalt can also be seen in a high desert dry river falls area just north of Lajitas, Texas. The much more massive Devils Tower National Monument in Wyoming is superficially similar but consists of a phonolite porphyry, formed by the intrusion of igneous rock.

Devils Postpile was used as the filming location for the third segment of the first episode of BBC's Walking with Monsters, set in Late Devonian Pennsylvania.

All content from Kiddle encyclopedia articles (including the article images and facts) can be freely used under Attribution-ShareAlike license, unless stated otherwise. Cite this article:
Devils Postpile National Monument Facts for Kids. Kiddle Encyclopedia.