Ridgecrest is a city in Kern County, California, United States, along U.S. Route 395 in the Indian Wells Valley in northeastern Kern County, adjacent to the Naval Air Weapons Station China Lake (NAWS, or China Lake). It was incorporated as a city in 1963. The population was 27,959 at the 2020 census, up slightly from 27,616 at the 2010 census.

Ridgecrest is surrounded by four mountain ranges; the Sierra Nevada on the west, the Cosos on the north, the Argus Range on the east, and the El Paso Mountains on the south. It is approximately 82 miles (132 km) from the Lancaster/Palmdale area, 110 miles (177 km) from Bakersfield, and 120 miles (193 km) from San Bernardino, the three nearest major urban centers. Private air travel in and out of the city is provided through the Inyokern Airport. There are currently no scheduled commercial flights.

The city has been near the epicenter of major earthquakes, including one in 1995 and a series of quakes in July 2019.

The settlement began as a farming community called Crumville in 1912, honoring James and Robert Crum, local dairymen. The first post office opened in 1941. By 1943, Ridgecrest had grown to 115 homes and 196 residents. NOTS (Naval Ordnance Test Station) was established in November 1943, providing a strong job base for the years to come.

Ridgecrest incorporated in 1963. During this era the growth of Ridgecrest was governed by the continuing needs of the high tech industries coupled to the Naval Station's programs for testing arms and guidance systems. 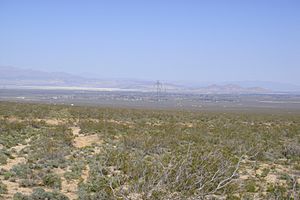 Overview shot of Ridgecrest, from the west on CA-178

The area, associated with the Eastern California Shear Zone, has experienced numerous earthquake swarms in the past (groups of several thousand quakes under magnitude 6.0 or so) often with no obvious mainshock. The 1995 Ridgecrest earthquake sequence started on August 17, when a magnitude 5.4 quake, centered 18 kilometers (11 mi) north of the town of Ridgecrest, shook the area and spawned over 2,500 aftershocks over the course of the following five weeks. Then, on September 20, 1995, the second large quake struck the area: it measured magnitude 5.8, and was at that time the largest earthquake to hit southern California since the January 17, 1994 Northridge earthquake. 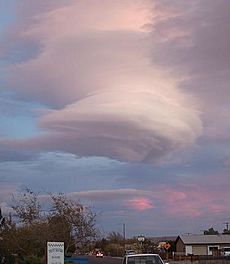 The weather in the Indian Wells Valley (Ridgecrest, CA) is predominantly influenced by its high desert location. The climate is characterized by hot days and cool nights with extremely arid conditions prevailing throughout the summer months. The mean annual maximum temperature for the Ridgecrest area is 75 °F (24 °C) while the mean annual minimum temperature is 48 °F (9 °C). There are wide annual temperature fluctuations that occur from a high of 119 °F (48 °C) to a low of 1 °F (−17 °C). The area is known to have wind as high as 75 mph (121 km/h) on a sunny day. Whenever winds exceed 30 mph (48 km/h) dust devils and dust clouds form in the area. December is the coolest month with an average maximum temperature of 60 °F (16 °C) and an average minimum temperature of 30 °F (−1 °C). The all-time minimum temperature of 1 °F (−17 °C) was recorded on December 23, 1963, and January 7, 1973. Ridgecrest is a desert, with an average of less than 5 inches (130 mm) "equivalent rainfall" per year, which includes less than 2 inches (51 mm) of snow. 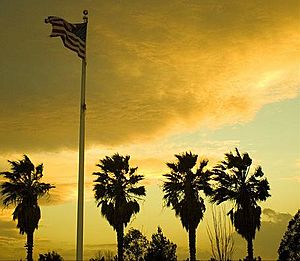 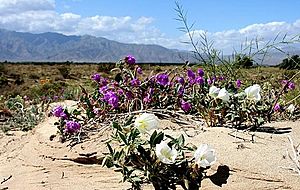 The most notable feature in the nearby area is the Coso People rock art in Big and Little Petroglyph Canyons. The Coso People were prolific artists and traded with distant tribes using tools crafted of stone. Archeological recovery at coastal Chumash sites in California indicates considerable trade with the Coso People.

Other traditional activities present are: 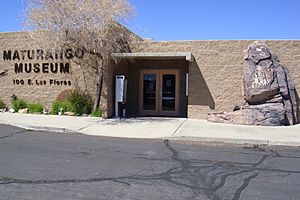 The front of the Maturango Museum

The Maturango Museum is located in Ridgecrest. The museum is best known for the guided tours to Little Petroglyph Canyon on China Lake Naval Weapons Station (NAWS). The Museum offers exhibits and displays featuring both the natural and the cultural history and diversity of the Northern Mojave Desert with exhibits of plants, animals, Native American artifacts, geology and contemporary arts and crafts.

Naval Air Weapons Station China Lake or NAWS China Lake is an airborne weapons testing and training range located adjacent to Ridgecrest and operated by the United States Navy and its contractors. The officer's family housing on base is noted for their monthly 'pig parties' where a lawn ornament in the shape of a pig placed by the previous host on another's lawn signaled who the next host would be and the next location for the neighborhood gathering. Each family would bring their meat to burn and a dish to share. At some point during the party, a decision was made to deposit the pig at another home for the location of next month's pig party. 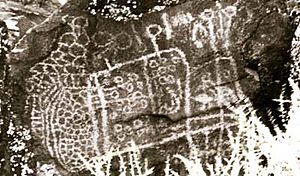 Coso Rock Art District, sometimes equated with the Big and Little Petroglyph Canyons is a site containing over 20,000 Native American petroglyphs now located within Naval Air Weapons Station China Lake, near China Lake and Ridgecrest, California. In fact, there are several other distinct canyons to the Coso Rock Art District besides the Big and Little Petroglyph Canyons. The most popular subjects are bighorn sheep, deer, and antelope. Big and Little Petroglyph Canyons were declared a National Historic Landmark in 1964. In 2001, they were incorporated into a larger National Historic Landmark District, called Coso Rock Art District. In 2014, the Ridgecrest Petroglyph Festival, a celebration of the petroglyphs, native culture, and Ridgecrest as a California tourist destination was created as an annual event. It was named as one of Groupon's "10 Most Unique Autumn Festivals in the Country"

Walker Pass (el. 5,250 ft (1.60 km)) is a mountain pass by Lake Isabella in the southern Sierra Nevada mountains. It is located in northeastern Kern County, approximately 53 mi (85 km) ENE of Bakersfield and 10 mi (16 km) WSW of Ridgecrest. The pass provides a route between the San Joaquin Valley on the west and the Mojave Desert on the east.

Naval Air Weapons Station China Lake (NAWS China Lake) is an airborne weapons testing and training range located adjacent to Ridgecrest and operated by the United States Navy and its contractors. Naval Air Weapons Station China Lake provides the majority of employment in the city at just under 8,000 jobs in 2018. This includes the government civilian workforce, active duty military personnel and private contractors.

AltaOne Federal Credit Union has its corporate headquarters in Ridgecrest.

The Searles Valley Minerals plant is located adjacent to the Searles Dry Lake near the town of Trona, California, about thirty miles east of Ridgecrest.

The principal employers in Ridgecrest in 2020 were: 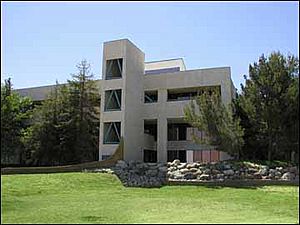 Cerro Coso Community College, a part of the Kern Community College District, was established in 1973 and has a full-time enrollment of 2,347. The 420 acres (1.7 km2) Indian Wells Valley Campus (IWV) is located in the upper Mojave Desert near Ridgecrest. The IWV Campus is the largest of the Cerro Coso campuses. It serves a population of about 50,000. The college serves the communities of Ridgecrest, China Lake, Inyokern, and Trona.

Ridgecrest is located at the junction of highways California State Route 178 and U.S. Route 395 (business route).

The City of Ridgecrest provides the Ridgecrest Transit shuttle bus service to and from Inyokern, connecting with the Eastern Sierra Transit Authority bus that serves Bishop and Mammoth Lakes to the north, and Lancaster (Metrolink station), with connections for Los Angeles, to the south. Kern Transit connects Ridgecrest to Lake Isabella and Mojave.

All content from Kiddle encyclopedia articles (including the article images and facts) can be freely used under Attribution-ShareAlike license, unless stated otherwise. Cite this article:
Ridgecrest, California Facts for Kids. Kiddle Encyclopedia.