Trona is an unincorporated community in San Bernardino County, California. In 2015 it had a population of approximately 1,900. Trona is at the western edge of Searles Lake, a dry lake bed in Searles Valley, southwest of Death Valley. The town takes its name from the mineral trona, abundant in the lakebed. It is about 170 miles (274 km) northeast of Los Angeles, on State Route 178. The ZIP code is 93562.

Trona is known for its isolation and desolation, as well as the nearby Trona Pinnacles. The local school plays on a dirt football field because the searing heat and highly saline soil kills grass. At one point it boasted an 18-hole golf course that was all sand except for the "greens", which were a softer grade of brown colored dirt. 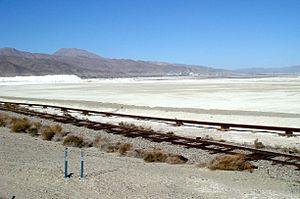 Starting in the late 1800s mining industry set up around Searles Dry Lake to mine borax.

Trona was officially established in 1913, as a self-contained company town, wholly operated by its resident mining company to house employees. Employees were paid in company scrip instead of cash. The mining company also built a library, a scrip-accepting for-profit grocery store, a school, basic housing, and minimal recreation facilities. The Trona Railway was built in 1913–14 to provide the town with a rail connection to the Southern Pacific (now the Union Pacific) line at Searles. The railway still operates today.

Economic booms and busts followed. Its most notable boom occurred during World War I, when Trona was the only reliable American source of potash, an important element used in the production of gunpowder.

Trona also serves as the headquarters and base of operations for the Trona Railway, a short-line railroad.

Since its heyday, Trona's population has decreased. Based on 2010 U.S. Census Bureau data, Redlands-based geographic information systems firm Esri estimates Trona had 1,883 residents in 2010 and 1,904 residents in 2015, down from a peak of about 6,000 several decades prior. Esri predicts a small rise in population to 1,941 in 2020.

The same collection of geologic forces which created the Searles Valley where Trona sits also created the natural resource of Searles Dry Lake, which contains rich deposits of chemicals, including dozens of minerals.

Located a few miles to the south are the Trona Pinnacles, an unusual landscape consisting of more than 500 tufa spires, some as high as 140 feet, rising from the bed of the Searles Lake basin.

A number of Hollywood films have been shot in the surrounding desert (particularly around the Trona Pinnacles), including Star Trek V: The Final Frontier and Planet of the Apes. In the 2000s, the town itself served as the setting for three films, Trona (2004), Just Add Water (2008) and Lost Lake (2012).

The Trona Airport serves the community as a general aviation airfield.

All content from Kiddle encyclopedia articles (including the article images and facts) can be freely used under Attribution-ShareAlike license, unless stated otherwise. Cite this article:
Trona, San Bernardino County, California Facts for Kids. Kiddle Encyclopedia.