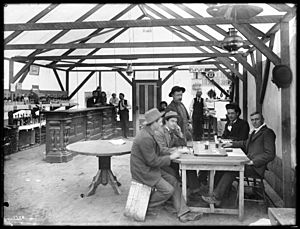 Gold was discovered at Rand Mine near the site in 1895 and a mining camp quickly formed, and was named Rand Camp, both mine and camp were named after the gold mining region in South Africa. The first post office at Randsburg opened in 1896.

This living ghost town has an influx of tourism throughout the year. The most visitors arrive between Fall and Spring due to the extreme heat of the summer. The season kicks off with the annual Western Days Celebration the third weekend of September. Events such as gun fights, panning for gold..live bands...dancing girls..food and vendors bring the town to life. During Thanksgiving, as well as New Year's Day weekend, the town is flooded by off road enthusiast, most ride into town on motorcycles and other off-road vehicles. The main drag is a legal trail. Many, including tourists frequent the General Store/ice cream parlor. Famous for their 1904 soda fountain and "Black Bart" banana split.Other attractions include the White House Saloon, The White Butterfly Giftshop, A Hotel gift shop,The Rand Desert Museum, The turn of the century Haunted Barbershop, Yohos unusual gifts and candies, Fasigs Antiques..The always open Jailhouse, and many unusual historical buildings. There are Artists and galleries. Truly a unique spot, boasting 38 year round residents. Echoes of the past California Gold Rush.Photographers dream. Best time to visit: Saturday and Sunday. Weekdays many are closed.

All content from Kiddle encyclopedia articles (including the article images and facts) can be freely used under Attribution-ShareAlike license, unless stated otherwise. Cite this article:
Randsburg, California Facts for Kids. Kiddle Encyclopedia.